Argentina: A Vast and Musical Country

Argentina: A Vast and Musical Country

Argentina’s great territorial extension is something that has always amazed both residents and visitors in our country. This outstanding feature allows for well-differentiated seasons, a wide variety of cultures, and a great diversity of landscapes. It is with a view to classifying all these features that the following 6 regions originate: North-West, Littoral, Center, Cuyo, Pampa and Patagonia. 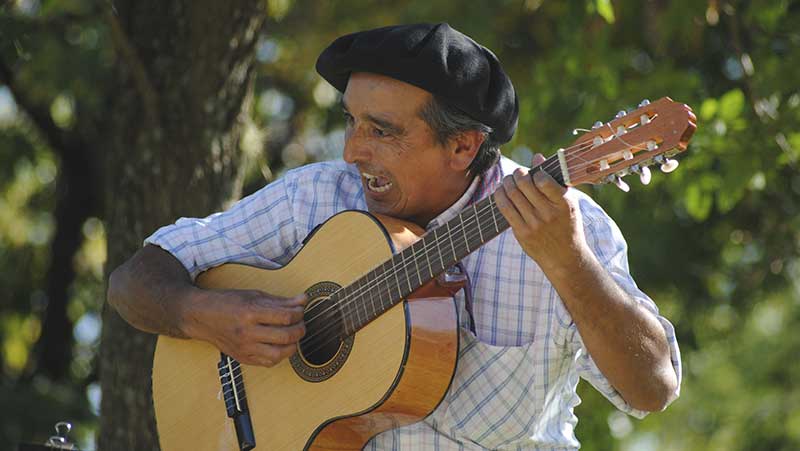 olklore music in Argentina has an undeniable and direct link with the natural environment, the customs and traditions as well as the climate of each region. Both the dances and the lyrical expressions find themselves greatly conditioned and shaped by these factors.

Argentine folklore took shape during the Spanish conquest and as a natural consequence of the cultural shock between the dominant culture (Spanish) and the receptive culture (the native peoples). It should be noted that folklore is never static and that has always been in constant change.

One example of the ongoing influence on Argentine music is that of the neighboring countries. In these cases, geopolitical boundaries disappear and the countries come together to form a whole (such is the case of the Cuyo region, given its proximity to Chile and the North-West region, which is close to Bolivia and Peru).

Characteristics and musical genres in each region

This region comprises the provinces of Jujuy, Salta, Tucuman and part of La Rioja and Catamarca. The wind instruments are predominantly used here, with a clear influence of the Bolivian altiplano (the Puna in Argentina), with both lively and nostalgic music genres living together. 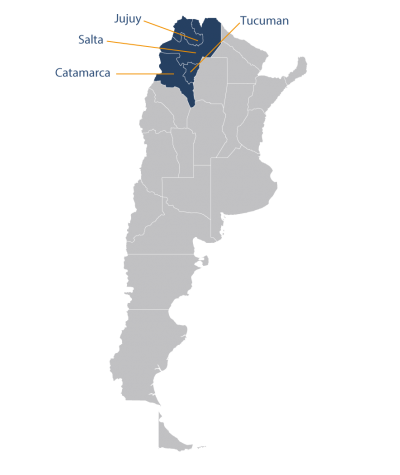 CARNAVALITO: This very cheerful dance is the most characteristic in the region. Danced in pairs, with some jumping and trotting to the beat of the music. This style is accompanied by instruments such as the quena (flute made from cane), the charango (a small stringed instrument with 10 strings), the siku (a wind instrument consisting of multiple pipes made from canes), and the bombo, among others. 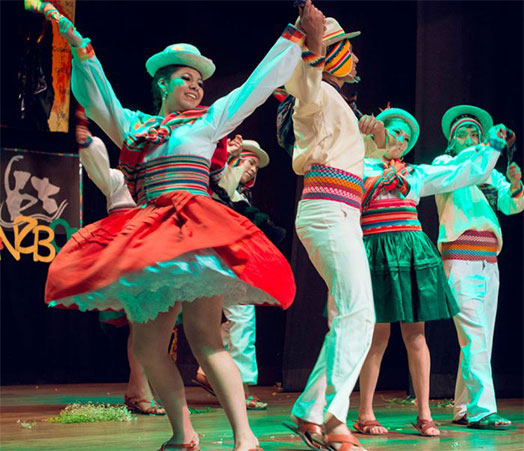 ZAMBA: This slow dance is performed by non-embracing couples who wave handkerchiefs throughout the song. The main instruments played are the guitar and the bombo. It is one of the most popular dances in our country. 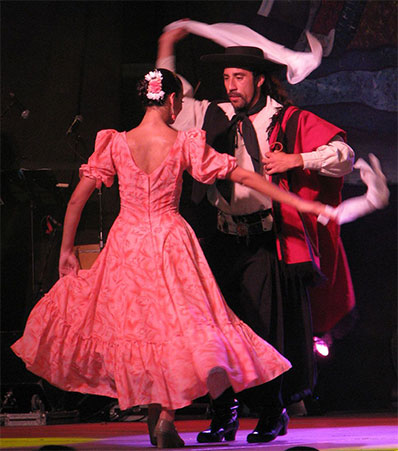 The leading province in this region is undoubtedly Santiago del Estero, where its original language, Quechua, is still in use. The most characteristic instruments are the guitar, the bombo and the violin. 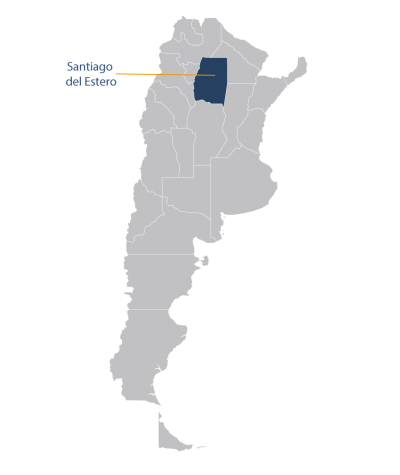 CHACARERA: Along with zamba, this is one of the most popular and widespread folk dances. It has a lively and fast-paced rhythm. Danced by non-embracing couples, with men stomping their feet (zapateo) and women waving their skirts (zarandeo), while moving back and forth. The prevailing instruments are the guitar and the bombo. 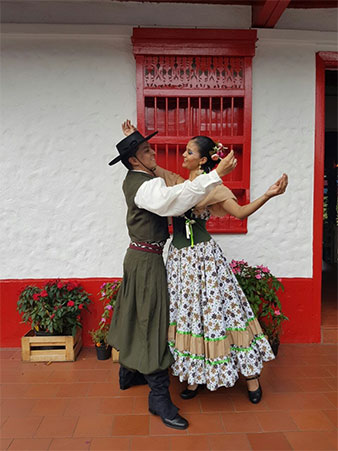 VIDALA: A kind of lyrical expression sung by one single voice, accompanied by the caja or the guitar. This style with a nostalgic color is not danced. It is most typical in the province of Santiago del Estero, though it has also reached neighboring provinces. 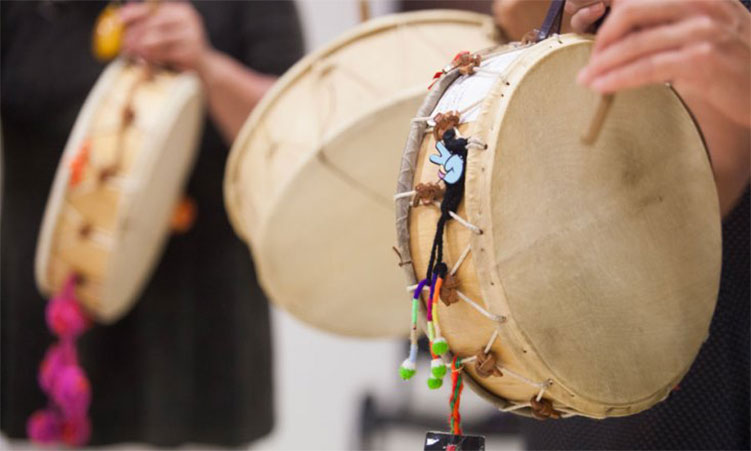 BAGUALA: Very similar to Vidala, but accompanied by the quena as well. It is a slow genre and it is only sung, not danced. 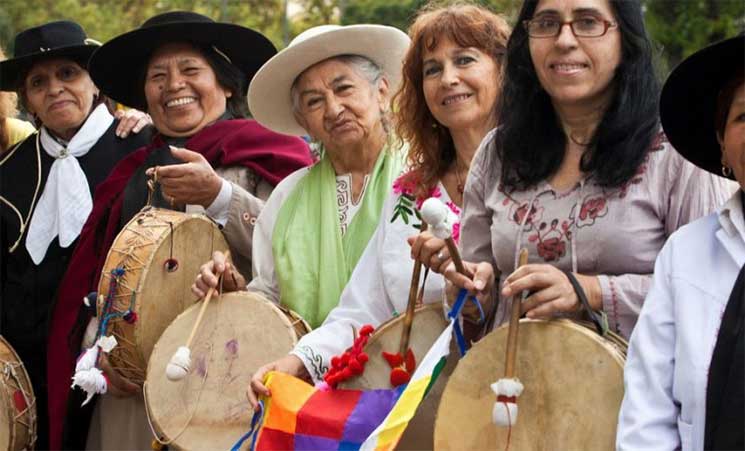 This region comprises the provinces within the Argentine Mesopotamia, namely, Misiones, Corrientes, Northern Santa Fe as well as part of Chaco and Formosa. Its music has a clear influence from the Paraguayan culture, with the presence of Guarani, the native language of this region.

This genre is traditionally sung in duets and typically accompanied by the accordion, the bandonion and the guitar. 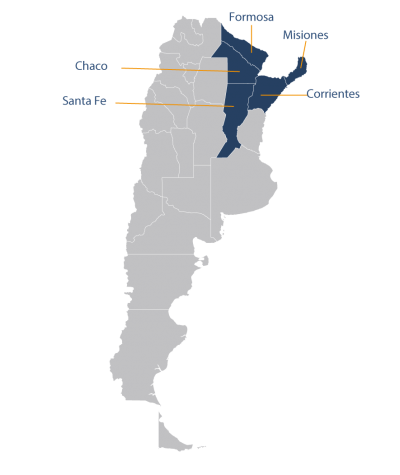 CHAMAME: A musical genre that is both sung and danced. With a very joyous and lively style, this rhythm entices dancers into dancing with many different partners. It resembles waltz in that it is performed at a slow pace and in embracing couples. 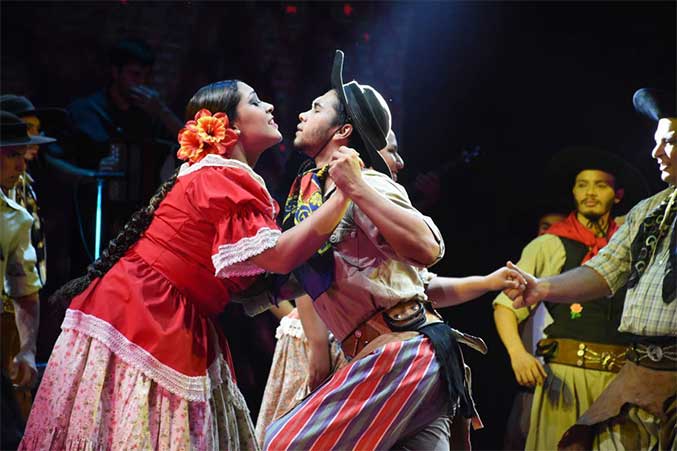 The land of wine, surrounded by the Andes Mountains Range and highlands. This region comprises the provinces of Mendoza, San Juan and San Luis. Highly influenced by Chilean music. The instruments most predominantly used are the guitar and its diverse variants. 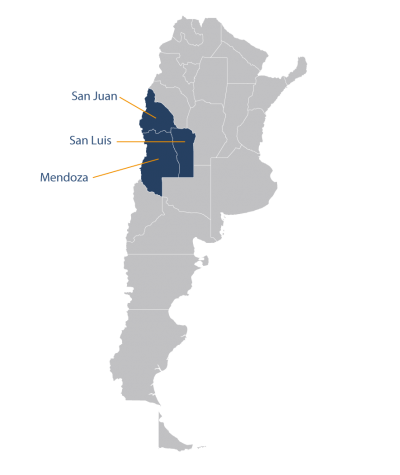 TONADA: This is the most typical genre in the region. With a lyrical and poetic form, this style is rather slow-paced. There is no choreography. It used to be sung by a soloist though nowadays it is also done in duets. 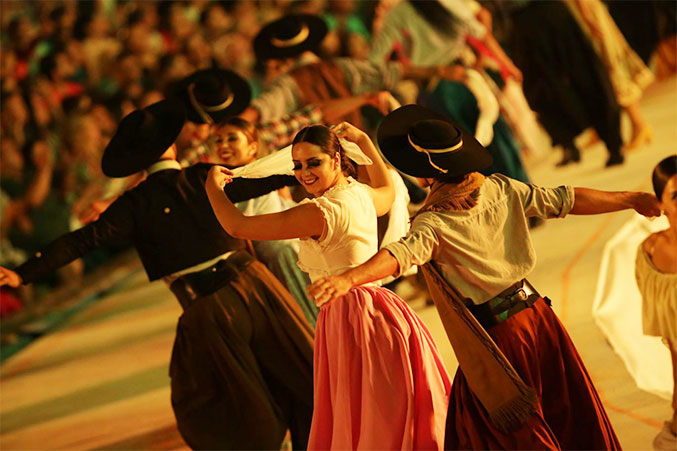 CUECA: This is Chile’s traditional dance, also danced in Mendoza mainly. Performed by non-embracing couples, its dance resembles the courting ritual between men and women. Handkerchiefs are used during this choreography. The traditional call “Aro Aro” interrupts the song for a copla to be said and after that the dance is continued. 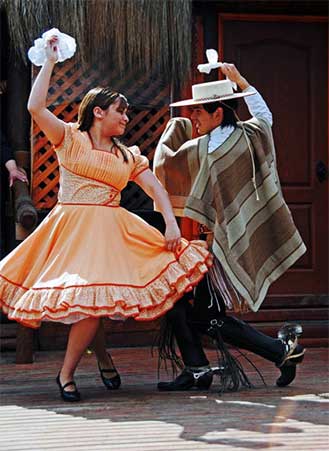 This region contains the provinces of Buenos Aires, La Pampa, Southern Cordoba and Santa Fe, and part of Entre Rios. Though tango (Rio de la Plata area) gets the most attention, there are several other musical genres worth mentioning here. 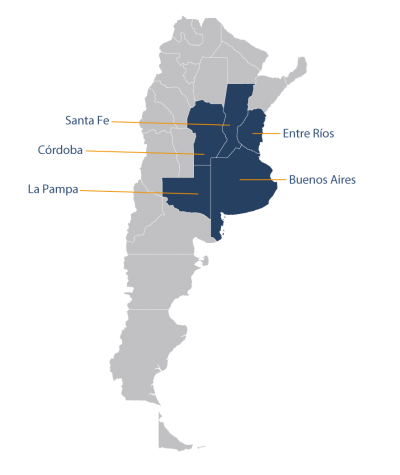 MILONGA: A very popular Rioplatense dance with a marked and lively beat (unlike tango) which is performed by embracing couples. It is always sung and its lyrics tend to be rather “naughty”. 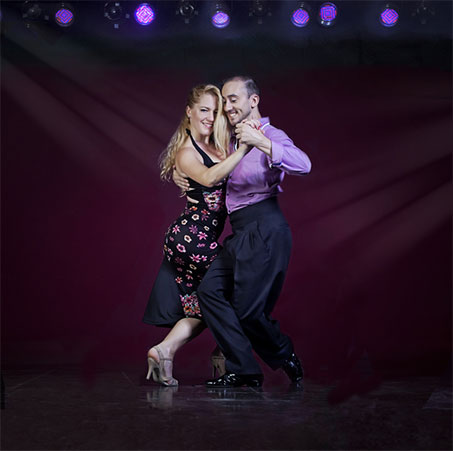 TANGO: In our country, this is the jewel in the musical crown. Born in the areas bordering Rio de la Plata, this style has a well-marked influence both from Africa and Europe. The term “tango” means “gathering” in an African language. Tango is a passionate and sensual partner dance that involves a lot of physical contact between the dancers. The essential instruments that accompany this rhythm are the piano, the violin and the bandonion. 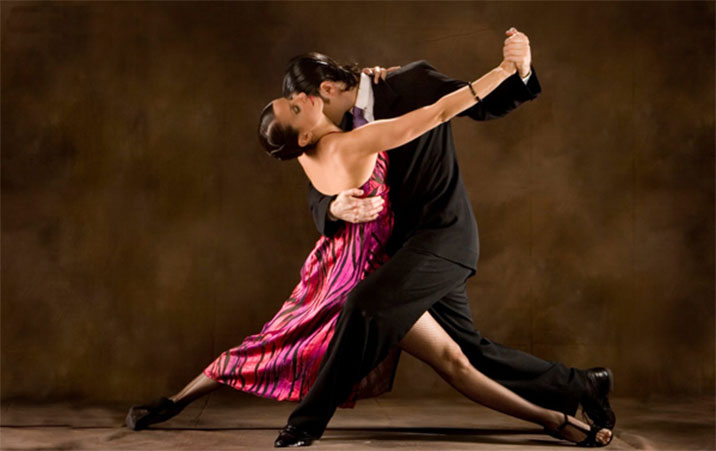 MALAMBO: In this style dancers stomp their feet (zapateo) and perform a series of feet moves. Though their feet are in the spotlight, the dancers’ dexterity is also shown in the additional movements of their arms and hands. Boleadoras are sometimes used. This rhythm is played with the guitar. 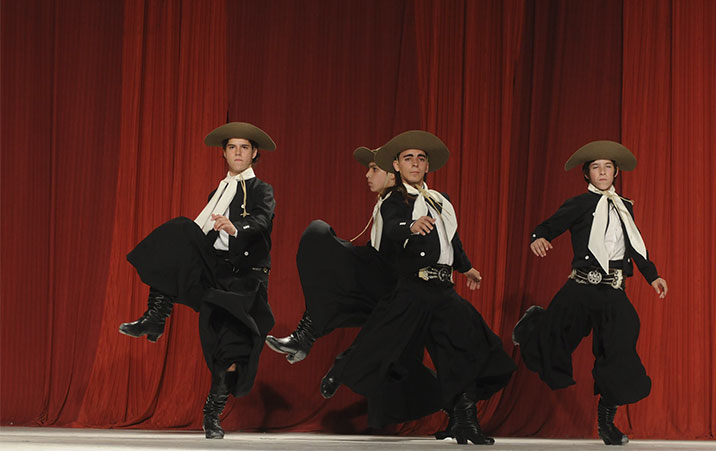 This is the southernmost and largest, though least populated, region in Argentina. The music here had a direct influence from the Mapuche and Tehuelche peoples. 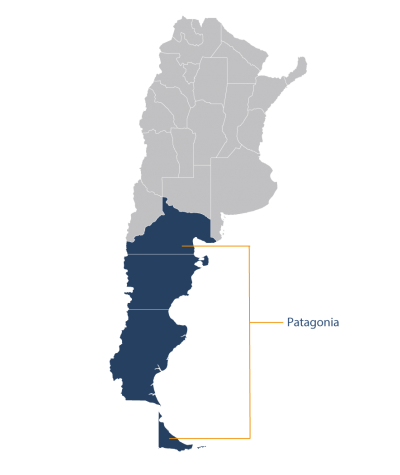 LONCOMEO: A Mapuche ritual dance with an exclusively masculine character. It is performed with the kultrun, which is a typical Mapuche percussion instrument. Nowadays its singing is as widespread as its dance. 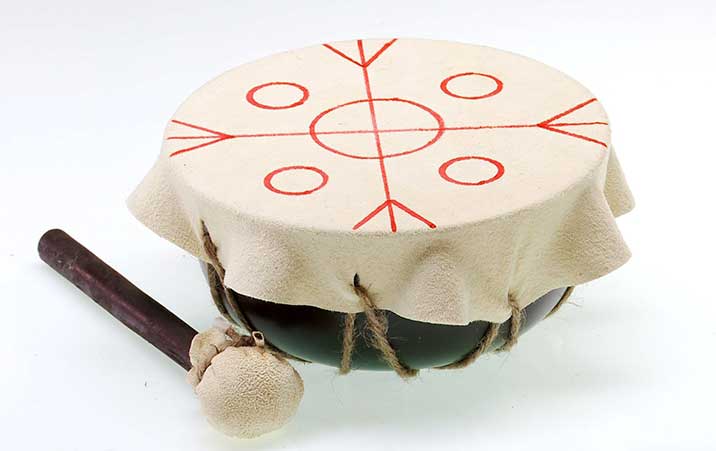 Come to Argentina and take a musical trip! Sail along the Parana River to the rhythm of Chamame; feel the Patagonian winds through the lamenting Loncomeo; let yourself be carried to the Puna with the cheerful beat of Carnavalito….And always head back to Buenos Aires for the beauty of a tango…

Argentina boasts culture and vastness all over the map!