One of the first images that comes to mind when thinking of Argentina is undoubtedly the asado (barbeque in English). Not only because Argentinians like good food, but also because this popular culinary practice is a true ritual in itself. 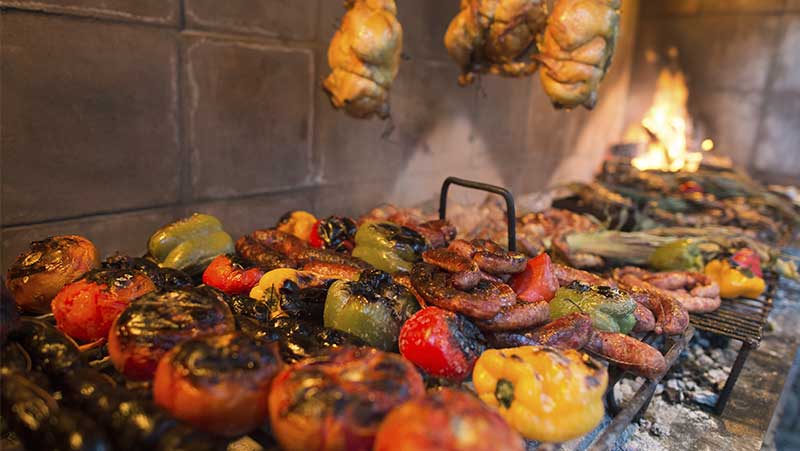 The asado represents a meeting of family, friends and acquaintances (who will often quickly become new friends). It does not matter whether there are lots of people or only a few. Everyone will have some sort role in helping out the person who always (without fail!) receives the most compliments: the asador (or the barbeque chef). In this instance, the meal should be seen as more of a pretext to meet up with loved ones, so that laughter and good times can prevail.

When you are invited to an asado, you probably need to know beforehand that on that day itself there will not be sufficient time for many other plans. A typical Sunday asado can begin at noon and last until almost 5 p.m., as long as the stories and anecdotes continue to flow.

Anything goes with the asado. Lamb, beef, goat, pork… with vegetables and provoleta cheese. The offal is always there as a faithful companion (black pudding, chorizo, grilled sausages and the famous sweetbreads, always served very crispy and with lots of lemon). The asado can be adapted to suit any weather, so there is never anything that stops it going ahead: you can cook over a wood or coal fire, on the grill, in the chulengo (a special barrel barbeque) or as a last resort, in the oven. 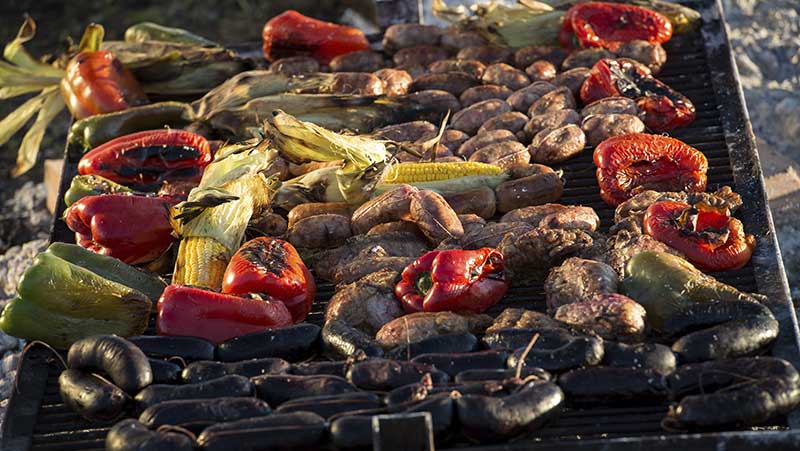 Most Popular Barbeque Cuts in Argentina

This cut corresponds to the rear lateral area of the cow. It has a skin that covers it, which is usually left on as it helps it to cook better and gives this tasty cut more flavor.

A famous Argentinian cut, which is located on the outer side of the cow’s back. It has no bone, meaning the meat is the main event. Its name in Spanish has nothing to do with the sausage, but it is the most popular type of steak. 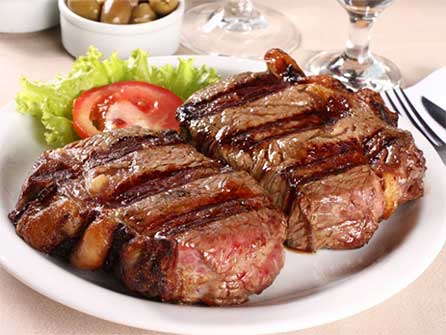 This is one of the most coveted cuts as it is very lean and tender. It takes a long time to cook and it is recommended to seal both sides to preserve its flavor. Although it is expensive, this meat is worth paying for as it is almost fat-free. 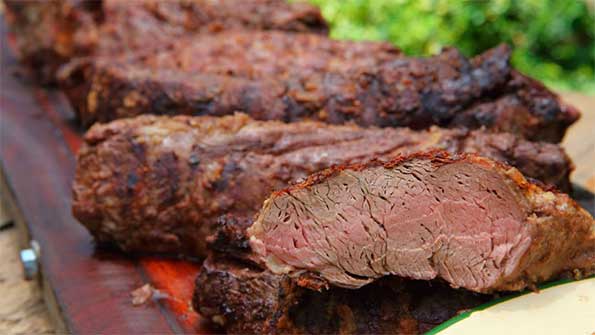 This beef rib strip is obtained by making a transversal cut. The presence of the bone and fat gives it a unique taste and aroma. It can be eaten as a single portion, making the most of the whole strip, or by cutting it into small portions, always conserving the piece of bone. 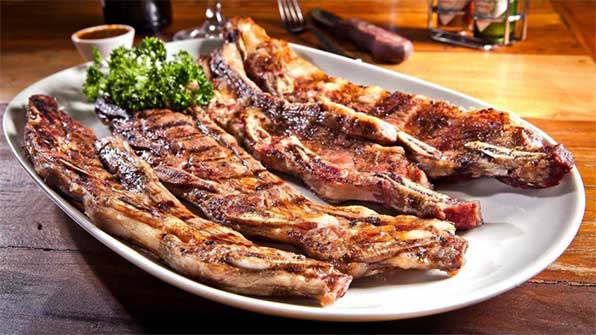 This is one of the most expensive cuts and is currently very fashionable. It refers to the peripheral zone of the cow’s diaphragm. It is dark reddish in color and cooks very quickly as it is a very fine cut. 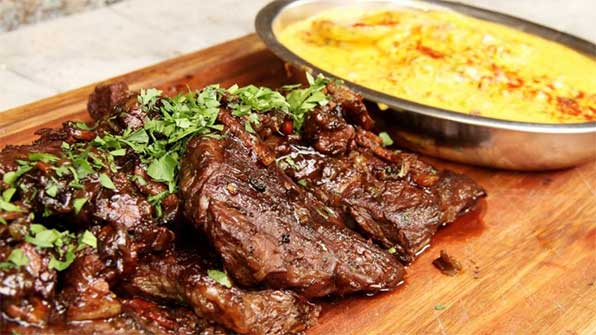 A layer of meat obtained from cows and pigs, between the hide and the ribs. It is cooked with the fatty side up, which leaves it very crispy. It is a real delicacy! As it is not thick, it is usually ready relatively quickly, but it is always recommended to let it marinate prior to cooking so that it is easier to eat, as this will give it an even more tender texture. 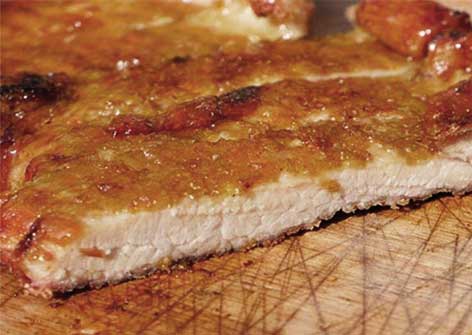 Meat-based sausage, very spicy. Its characteristic reddish color is from the added paprika (this is what differentiates Argentinian chorizo from Spanish chorizo). The edible sausage skin that is currently used is no longer of animal origin. Here, chorizo is eaten between two slices of bread, which is called “choripán” (the combination of “chorizo” and the Spanish word for “bread”). It is typically eaten before the main cuts of meat are ready.

This sausage made from coagulated and cooked pig’s blood is famous for its dark color. It is very spicy and has many variations. There are usually two positions: either you like it a lot or not at all. 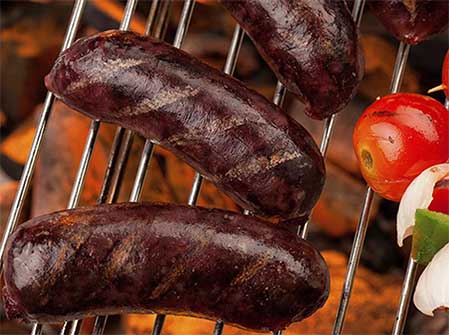 A faithful companion to meat and a true emblem of Argentinian cuisine. It is made with various spices such as garlic, paprika, oregano, parsley, salt, oil, vinegar and pepper. Many will wonder where the unusual name comes from. There are two different versions of the story (you can choose which one you think is more accurate):

1- After an arduous search to find Worcestershire sauce (an English condiment), Irish immigrant James McCurry realized that it was not worth the effort. For this reason, he tried to create his own recipe with the ingredients he had available. The name of this sauce is derived from the Spanish pronunciation of James’ name by the gauchos of the Pampas region: Yimy (Jimmy) – Churri (McCurry).

2- In the context of the English invasions at the beginning of the 19th century, it is said that the British prisoners in the hands of the Spanish crown longed to be able to consume curry as in their country. To ask for it, they would say “Give me curry”. 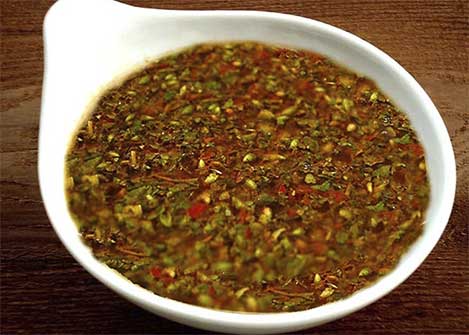 It is a very simple and widely consumed sauce that, despite its limited ingredients, gives a lot of flavor to meat. It is prepared with diced onion, chili, lemon and tomato. Oil and vinegar are also added to give the sauce its unique flavor.

Asados with Argentina on the Go

As the finishing touch to the trips taken with our agency Argentina on the Go, our clients are usually invited to our office to share the ritual of the asado with us. In the chulengo located on the terrace, the fire is prepared in advance and various cuts are chosen so that travelers may taste a real Argentinian asado. The menu always includes offal, main cuts such as the traditional flank steak or tenderloin, salads to accompany and a good red wine that never disappoints. You can choose how you would like your meat cooked: rare, medium or well-done.

During the asados, our visitors not only share their travel experiences, but also take part in a cultural exchange that is extremely enriching and a truly unforgettable moment.

There is no doubt that by experiencing an asado and all that it implies, the saying: “Full stomach, happy heart” will be fulfilled. Not only will you be satisfied for having eaten a delicious meal, but you will also understand the sense of conviviality that is felt during this Argentinian ritual. You will undoubtedly leave with some beautiful memories of the experience. 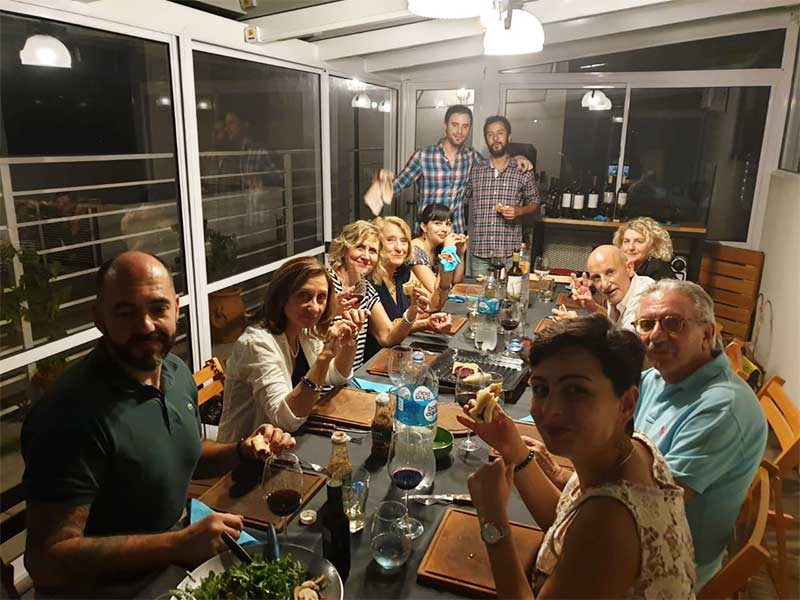