For our post today you´d better wear your most comfy shoes, as we will be taking you on a tour of some of the most iconic architecture in Buenos Aires. The journey will be long, but well worth it. 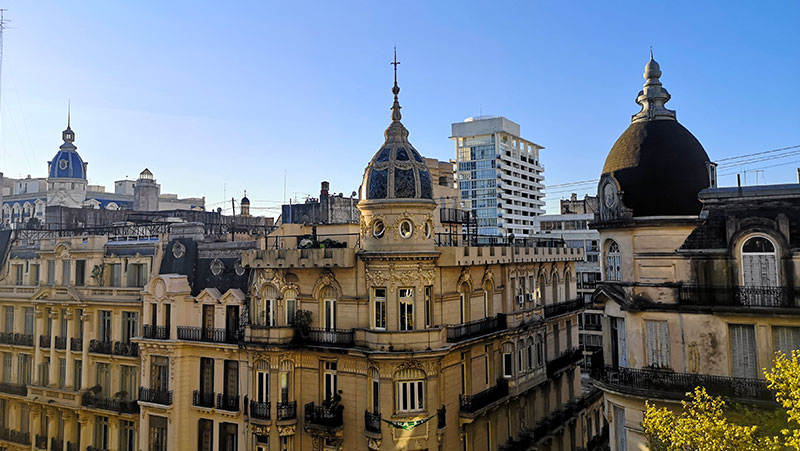 For this fascinating adventure we have invited two talented women who have long admired Buenos Aires from a different perspective. They are Adriana Claudia Cichero – an amateur photographer, a content creator, well-known for leading a census of all the domes in Buenos Aires- and Marga Fabbri – a plastic artist and architect who brought together her two passions in an endeavor to rescue the Architectural Heritage of this capital city.

Two wonderful accounts that will surely invite you to discover unique places. “Buenos Aires is such a big city…every barrio or every area in it will make you feel somewhere else in the world. The diversity of its architecture turns Buenos Aires into one of the most beautiful cities in the world”, points out Adriana Cichero.

Marga Fabbri, in turn, encourages us to opt out of the traditional itinerary. “I suggest you get somehow lost in the city, get off the beaten track, if you like. Wander up the streets, the squares and parks, keep yourself away from the most crowded places. A railway station, a diner or a bar in a further-off barrio like Villa Devoto or Boedo, Retiro railway station, Casa Victoria Beccar, Palacio San Martín or a traditional café such as Margot.” 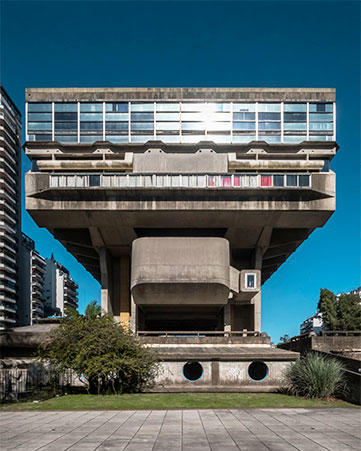 “Buenos Aires is said to be eclectic. Its heterogeneity stems from the many different styles, and the diversity of styles in one single façade (…). Buenos Aires´s is a melting pot of styles: Italian, French, colonial. It originated as a colonial town, a place of passage and it was not until 1880 that Buenos Aires was declared as the capital of the Republic and started to be taken more seriously as a city. Being a capital in which the seats of the political powers were to be based, architectural-contest buildings were therefore planned”, explains Fabbri.

This is reflected in the architecture of the Congress or the Casa Rosada. Back in those days, and with a view to preparing for the centenary of the Revolution of May, the idea was to renovate the city by imitating the Parisian style. The great constructions underway, in turn, led to the emergence of banks (which would finance them), as well as of English investments, palaces, among others.

“The styles used were different, each state project was to be modelled on Paris. They would hire French architects and also held contests. We went from being a colonial town to becoming a great metropolis that was starting to connect with the rest of the world”, the architect says, not without acknowledging first that besides that boom our city is still under permanent development.

“Buenos Aires is in constant transformation. Take Puerto Madero. 20 years ago there were no towers. Puerto Madero was built back in the 18th century and some 10 years later became obsolete as larger cargo ships were unable to dock. Later on arrived a revolutionary idea that converted the place into what we see today. Buenos Aires has never stopped changing”.

With all the information received we have sorted our content into five categories. Many places will be left out, but we hope this becomes an excuse for you to come and see these and other wonderful spots for yourself.

It may interest you: The Most Emblematic Barrios in Buenos Aires 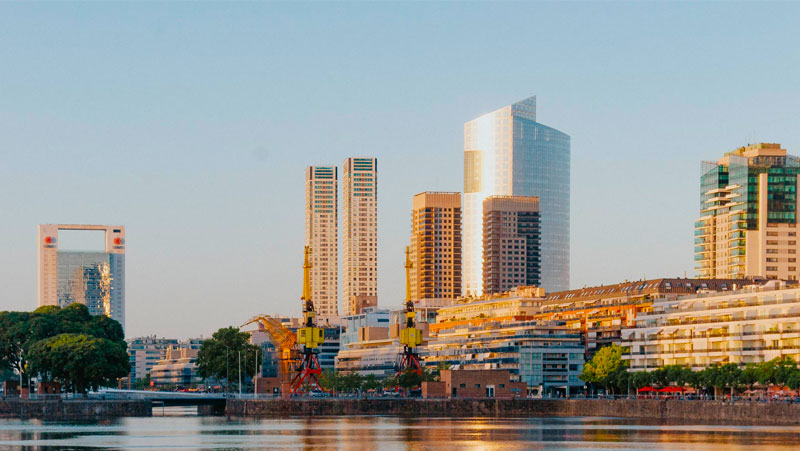 This group comprises some of the most photographed landmarks, most of which lie right across from the iconic Plaza de Mayo: the Casa Rosada or Government House, which was designed by the Italian architect Francesco Tamburini; the colonial-Baroque Cabildo and May Revolution National History Museum, or the Metropolitan Cathedral. Only a few blocks away from there, in Plaza de la República, lies the highest iconic monument in the capital, the Obelisk, which was designed by Alberto Presbich, an architect from Tucuman. 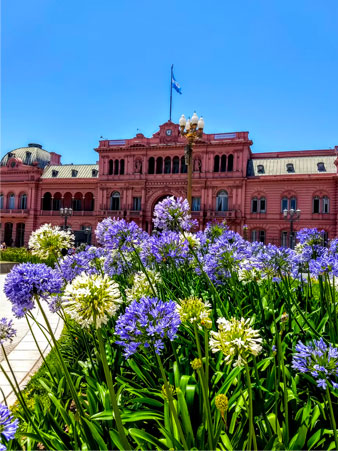 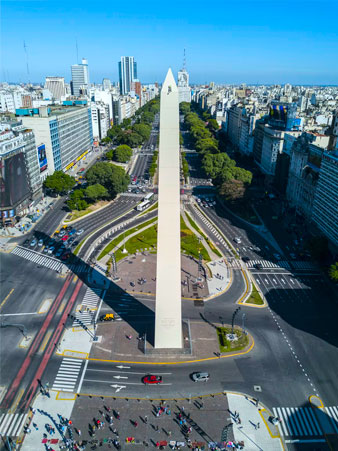 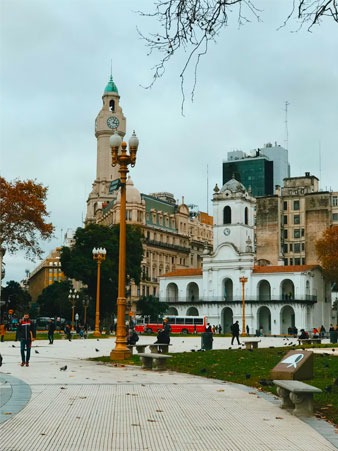 Naturally, our guide here will be Adriana Cichero. Her passion for domes arose simply from watching the visitors in the city stand in awe of Buenos Aires´s architecture. “I looked up to where they (the visitors) were looking and into sight came the Bencich building dome on the corner of Diagonal Norte and Florida streets. It dawned on me that up above our heads lay a wonderful world other than the domes of the National Congress and its neighboring Confitería del Molino which, as a child, I would contemplate from Plaza Congreso”. 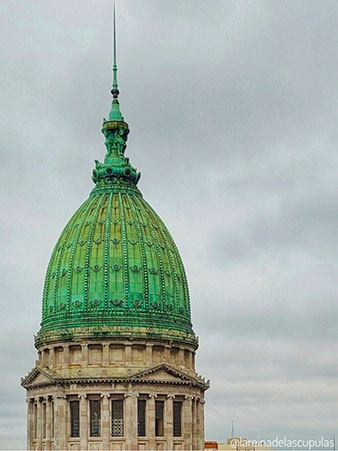 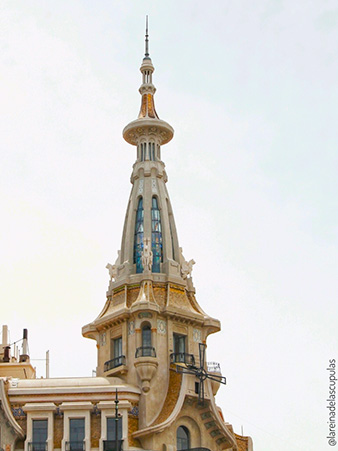 That was the motivating force behind her Census to find out how many domes there are in the city. The estimated number so far reaches some 300 domes.
Below are some of the most recommended by her:
.
– The corner of Diagonal Norte and Florida street, also known as the corner of the five domes – personally, one of the most beautiful corners in the city – is host to the most outstanding domes.

– Visitors may take in several domes as they wander down Florida Street up to Avenida de Mayo or stand in Peru Street and look towards Plaza de Mayo to admire the architectural harmony created up there.

– Barolo Palace: Visitors may go on a guided tour or either go up to the rooftop and enjoy the amazing view of the city.

– Avenida de Mayo, in the direction to the Congress. As soon as you reach the square, I suggest you turn round and contemplate Barolo Palace again, this time from a distance, and notice the architectural ensemble it is created with its neighboring Inmobilliaria Building.

– The National Congress (with its recently restored façade) and the Confitería del Molino (its restoration is at an advanced stage).

– Callao Avenue is another avenue that boasts exquisite architecture – an illustration of the sumptuous wealth of our country some centuries ago. 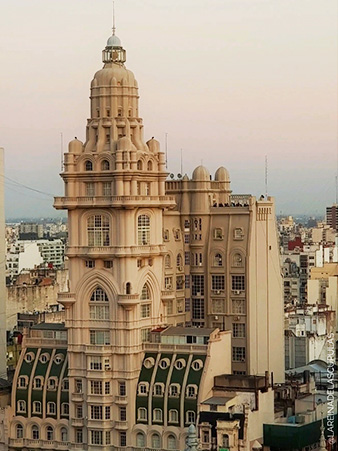 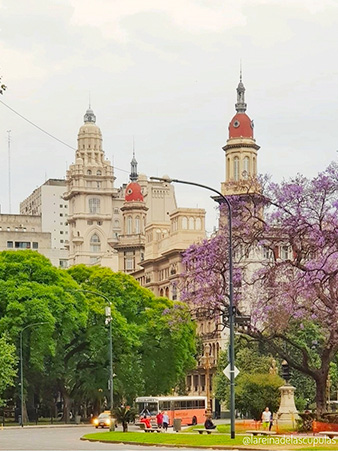 In a fragment of the conversation, the architect Marga Fabbri explains that the city is in constant renovation. Here we would like to bring into focus the majestic area of Puerto Madero, which is home to high-rise buildings as well as works like Puente de la Mujer, designed by the Spanish architect Santiago Calatrava. On this list we should not leave out the awe-inspiring Mariano Moreno National Library, designed in the brutalist style by architects Clorindo Testa, Francisco Bullrich and Alicia Cazzaniga. 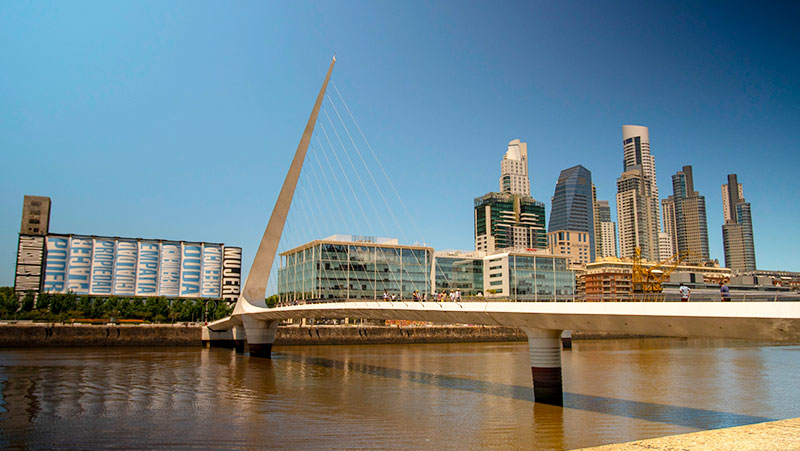 In an earlier post we had a “tour” of the most emblematic barrios in the city. Indeed, these locations also reflect the wealth of Buenos Aires when it comes to its architecture. From the English barrio Caballito to the tenement houses in La Boca or the colonial-style museums in Belgrano. Here you should stick to what our invited experts recommend if you wish to be amazed. 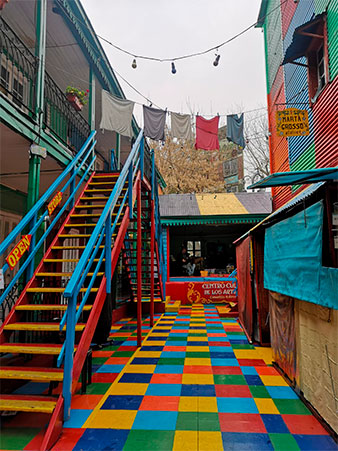 Before we close our post today we would like to share with you some amazing sites and combine them with activities you may engage in while in there. Watching a play at the Colon Theatre, considered one of the best ten opera houses in the world by National Geographic and whose architecture was inspired by the Paris Opera. And when it comes to awarded places, Ateneo Grand Splendid – one of the most beautiful library in the world – is a must visit. 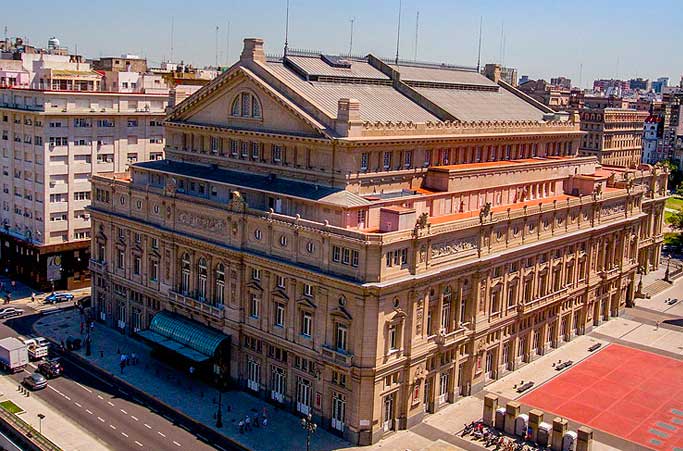 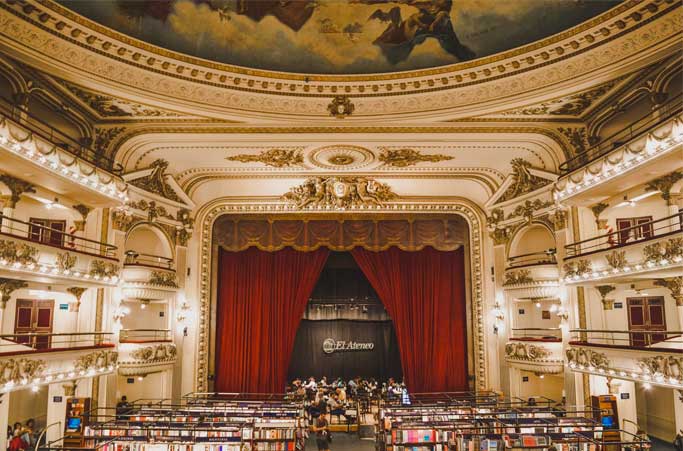 And to crown the day, why not stop by the Latin-American Art Museum of Buenos Aires, designed in a deconstructive style, and end up savoring a glass of some exquisite wine on one of the capital´s rooftops with magic views of Buenos Aires city, such as the Trade Sky Bar, the Alvear Roof Bar or the Cielo Sky.

As mentioned at the beginning of this special edition, Marga Fabbri combined her two passions in order to promote Buenos Aires´s Architectural Heritage. Her unique method encourages us to leave our comfort zone and tour the fascinating Argentine capital. “This project sprang from my personal experience in this city, which I observe so much and paint”

Thanks to her work she managed to see many emblematic buildings and spaces restored, so she created this new way of admiring them. First, by portraying them in her paintings. Then by inviting artists, both professional and amateur, as well as locals and travelers to follow suit. The idea is to go up to private places, away from the most traditional activities offered in the capital, and draw. “So that you look with your heart, your soul”. Ideally carrying no cellphones or anything that might distract you. You don´t need to be an artist to take part in this initiative. 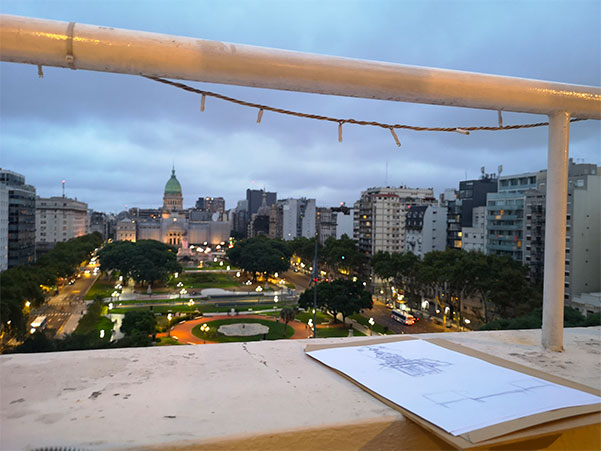