How do I get to see pumas while traveling in Argentina?

How do I get to see pumas while traveling in Argentina?

Back in 1965, the mistake made by a journalist who couldn’t translate “yaguareté” (the animal on the Argentine Rugby Union crest) into English, gave rise to the Argentine team’s nickname: Pumas. “As we were walking out of the plane one journalist came up to me and asked me about the jaguar. As my English was rather poor at the time, I told him it was a puma”, Agustín Silveyra recalled during an interview. 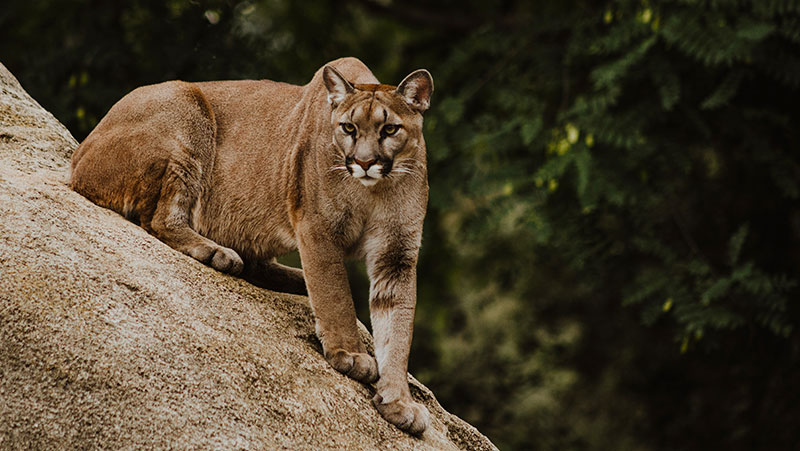 World-renowned by this alias, for many years our national rugby team has embraced this nickname on the playing field by paying tribute to the strength and power of the pumas that inhabit our lands. Beyond the emblematic mention of these felines, in this opportunity we will be addressing in detail the observation of these animals while sharing some fascinating stories about them.

This stealthy creature captivates nature lovers, who cannot help but look in awe at the postcards portraying this extraordinary “wildcat”. Dwelling in large territories, this solitary and shy predator cunningly hides in the mountains and snow, a fact that may sometimes hinder its sighting. Pumas feed on small rodents as well as bigger creatures like hares, guanacos, ostriches or corzuelas.

The puma, like every other ambush hunter, keeps watch of its quarry before it actually hunts it. This behavior pattern guarantees the survival of condors, foxes and other animals, which jump at the chance of food supply. This is particularly true during the summer season, when several species would have nothing to feed on if this meat eater didn’t leave some food behind. The puma is especially important to preserve the balance of the ecosystem in the diverse regions across the country. 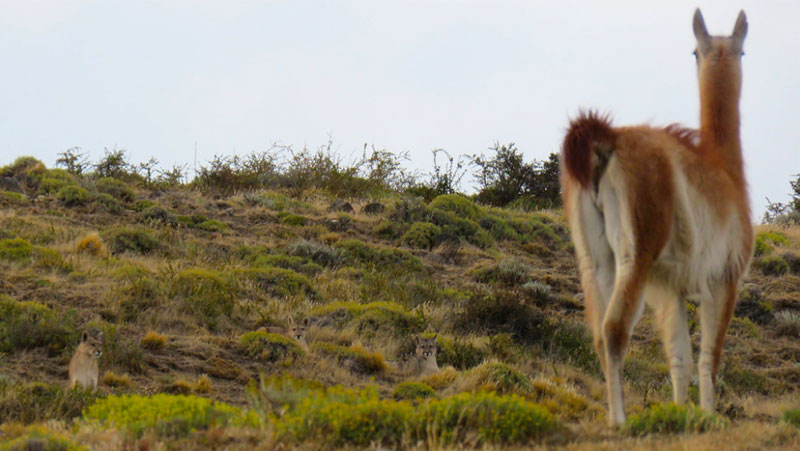 Where can we get to see pumas?

Throughout Argentina there are at least five subspecies of pumas. Patagonia and San Juan are the most popular settings for their sighting. However, the puma dwells across the whole country, except for Tierra del Fuego where, according to experts, this animal has never lived. “Even when it is hard to catch sight of pumas, they are all over the place”, explains Kai Pacha, the president of Pumakawa, a shelter committed to the preservation of these wildcats.

Patagonia is one of the regions where to go on a puma watching safari. However, experts claim that this feline may stealthily escort travelers as they go trekking in the mountains, even when the latter are totally unaware of that.

The puma is a loyal companion and observer that, while going unnoticed, keeps a careful watch of its territory. Quoting Kai Pacha: “There are more and more sightings, as the pumas cross roads and highways. Also the creation of special spaces is under way, where tourists may watch pumas and in turn revalue and preserve their presence. Such is the case of the Patagonia Argentina Park”. 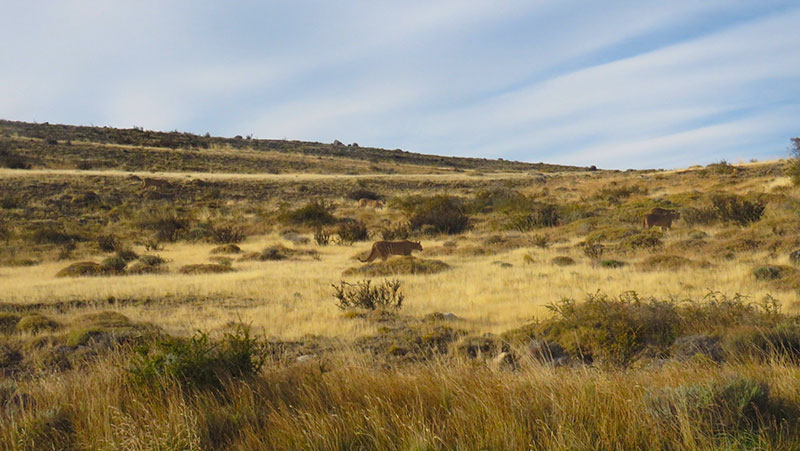 What should we do if we run into a puma?

Kai recommends keeping calm, not showing your back or running. When there are kids these should be given a piggyback. It is also a good idea to raise your arms to look bigger, and if necessary, start yelling to chase away the approaching animal. Even when the puma is a wild creature, Kai reminds us that as long as we do not pose a threat to them, the sighting will be safe.

Additionally, according to Sebastian Di Martinol, the director of Conservation for the Rewilding Argentina Foundation, the puma is elusive, and the cases of attacks on human beings are rare. When you are out on a walk around the countryside in Patagonia and you happen to spot a puma, the latter is likely to have caught sight of you first and been passively keeping watch of you from some place. The puma becomes shy in the presence of human beings. 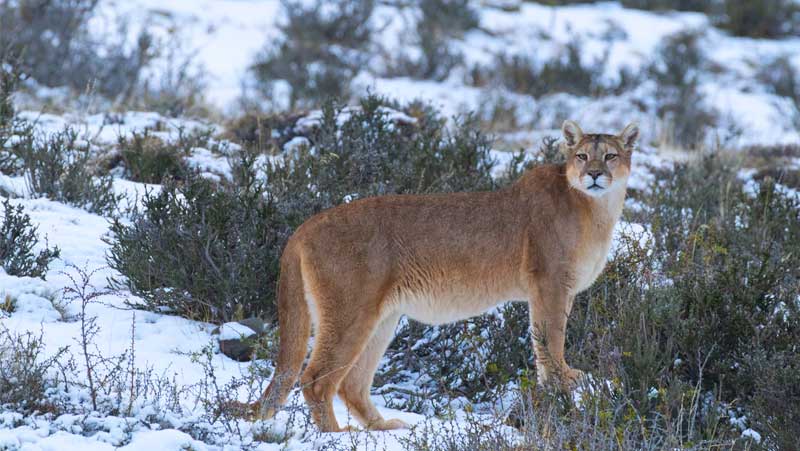 How can we watch pumas without doing any harm to this species?

When enquired about this, Kai explained that this activity may in fact benefit the conservation of the species: “The puma, which is usually wrongly considered as malicious, needs to be seen in a different way. The puma is an umbrella species: when protecting it, we are also preserving its prey species, and thus protecting its habitat. By preserving pumas we preserve what we would otherwise disproportionately destroy. Pumas act as “a handbrake”, as well as a “thermometer” that measures and evaluates how healthy or unhealthy their environment is.”

She reminds us of the significance of pumas: “If the puma eats the farmer’s livestock, it means that we haven’t left any wild prey for it to feed on in its own habitat. It is scientifically proven that these felines have a preference for the wild prey: if we restocked their territory with viscachas, for instance, the pumas would eat the viscachas and the conflict with beef farmers would come to an end.”

She also points out that, as long as the appropriate safety measures for both pumas and human beings are taken, their conservation is favored. “Their majesty may eventually be appreciated”, says Pumakawa Foundation’s president, who has devoted her entire life to the preservation of this feline. 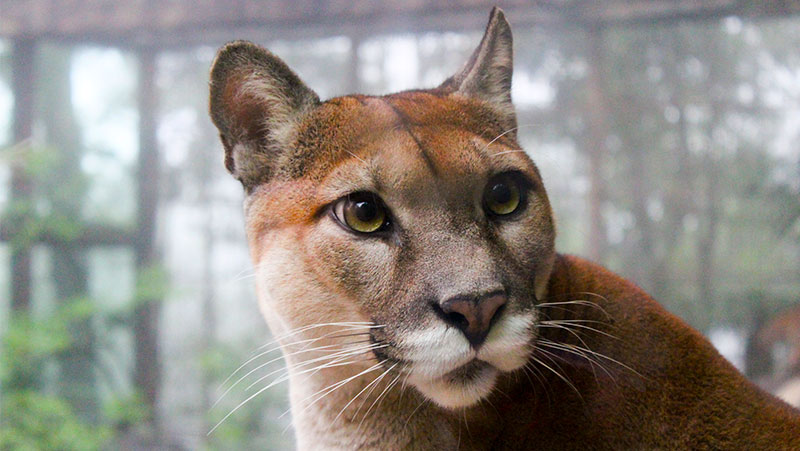 Kai shared with AOTG one special story involving pumas. The incident took place back in 2009, during the fires that harmed the reserve and two days later endangered the 9 pumas’ shelters in the premises. Despite the police warnings, Kai decided to run the risk and try to set the animals free.

“The flames were so high, the crackling and popping noises drove me to despair. There was so much smoke I couldn’t see… The police decided to withdraw when they saw me approaching the fire. I ran in and threw open every door, but I couldn’t see them….I cried and apologized to them, because we had not only done harm to each of them, as a result of which they were in captivity (having killed their mothers or kept them as pets), but we were also letting their cages burn now. I felt helpless. I felt that human stupidity was much more dangerous than the fire itself”, she remembered with nostalgia.

What happened then was a life lesson: “In great despair I ran towards the people who had helped extinguish the fire source. They were staring at me in shock. So I looked around and realized I was surrounded by the pumas. They hadn’t scattered, just as I’d figured they wouldn’t. Instead, they’d run after me and stopped when I stopped, surrounding me. I reassured the people and then took a close look at each of the pumas, as I had the feeling they were somehow talking to me. Those few minutes lasted forever and marked my life. I walked them back to their enclosures. It was all done with calm, amidst the chaos of people, smoke and noises”.

That is why she calls herself Kai Pacha, which means “guardian puma here and now”: “puma” not like in the nickname of the rugby team, but more from a spiritual side, as well as a legal one, as she registered this name in her identity card. 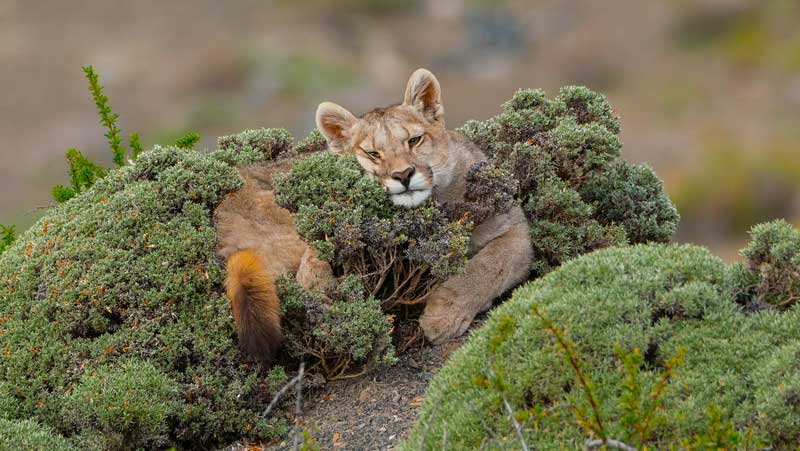