Traveling is not only about gastronomy, attractions, hotels or tours around memorable places. Eventually, with each trip, we get to discover different cultures, get rid of prejudices, and learn and unlearn about several issues. And you know what is best? At the end of the day, each experience turns out to be unique.

T he diverse beliefs and religions also speak of the destinations we visit. Their different features give us a picture of the locals and their life style. “Traveling is a practice with dire consequences for prejudices, intolerance and narrow-mindedness”, a famous quote by the American writer and speaker Mark Twain as he briefly explains how trips can change the way we see and get to know the world.

Thus, with the open-mindedness and respect that these topics require, we will be describing some of the most famous popular beliefs in our country, looking at the Catholic Book of Saints, the places related to these men, as well as some popular saints in Argentina.

The word Saint derives from the Latin word Sanctus, from the verb sancire, which means “to make holy”. To date the Congregation for the Causes of Saints has over 10,000 saints registered. These are men and women that devoted their lives to their faith. Two of them happen to be Argentine, and today we would like to share a summary of their mission.

Argentina is home to 9 beatified brothers and sisters, 7 venerated persons and over 40 servants of God. Colloquially speaking, a hierarchy with which they are classified within this religion. Many of them are in the process of beatification. 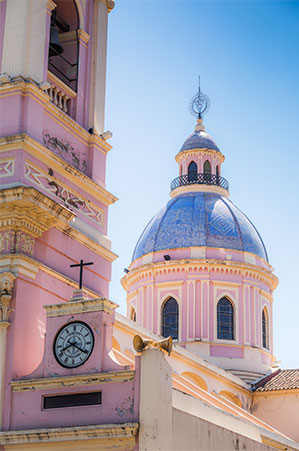 José Gabriel del Rosario Brochero was born in Villa Santa Rosa de Río Primero, a town in the province of Córdoba. Known as the “gaucho priest”, this man of God was canonized in 2016. His life, legacy and stories, his fight and help to the cholera patients in 1867 were all outstanding facts in his missionary work. His use of colloquial language and the local slang marked many believers who followed his message. His long journeys around the sierras on the back of a mule are proof of what he means to the people in the area.

“God is like lice: he is everywhere, but he has a bias for the poor” (a quote by San José Brochero)

Villa Santa Rosa de Río Primero: This small town went under a significant transformation following the canonization of its priest. What used to be his home became a museum that exhibits details of his work: miracles, childhood, among other historical facts. 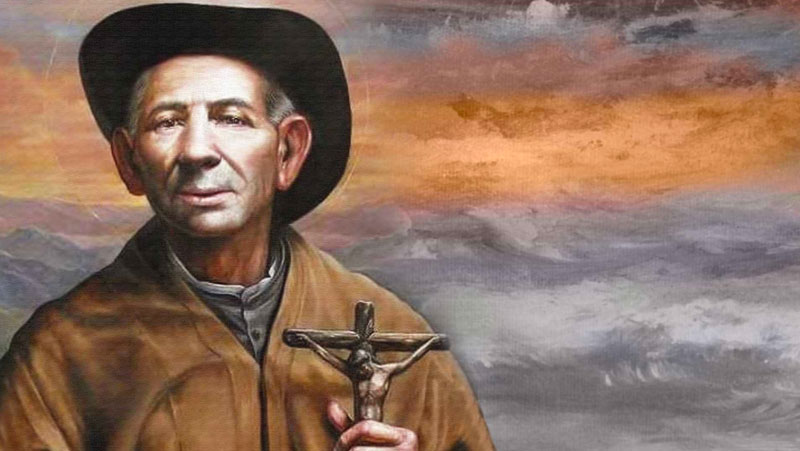 This priest was Argentina´s first saint. His canonization took place in 1999. He was considered a martyr after being shot dead in 1934 in Spain due to his faith. He was born in Boedo, one of the most emblematic neighborhoods in Buenos Aires, but as a child he went to live in Europe. This saint´s skull lies in the major chapel of the Hermanos de La Salle School, in the Argentine capital city. 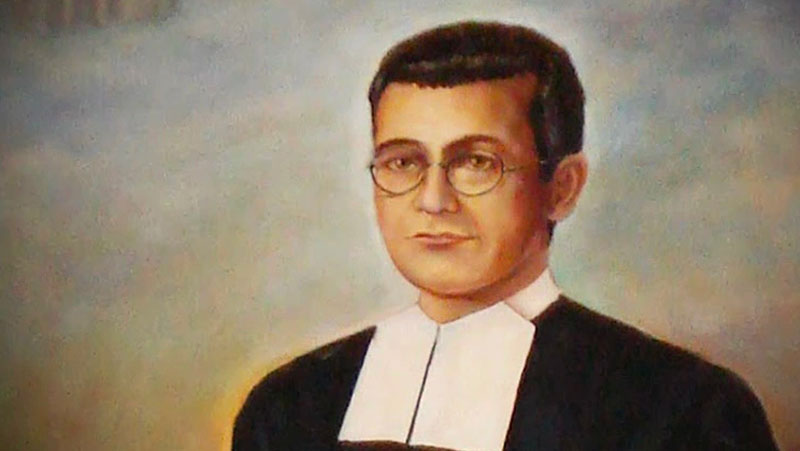 Besides these two men canonized by the Supreme Pontiff of the Catholic Church, there are popular saints who, despite not fulfilling such requirements, have become cultural and social icons for diverse regions in the country. Just as described by the anthropologists Susana Chertudi and Sara Newbery in their book “La Difunta Correa” (1978), this is a popular canonization, these figures have been made holy by the people, without the intervention of the Church.

These saints are generally more local and directly associated to the customs of the place. A strong bond that involves a mutual understanding and proximity between the believers and the saint, who – more often than not- died a violent death and/or had a hard life.

A prisoner called José Carrizo who was burnt alive at the stake on the former Royal Road in Catamarca after being accused of spying. On the spot where this young man was executed was placed a wooden cross named the Quemadito´s Cross. The locals lit candles and begged favors from him.

It may interest you: The Most Emblematic Barrios in Buenos Aires 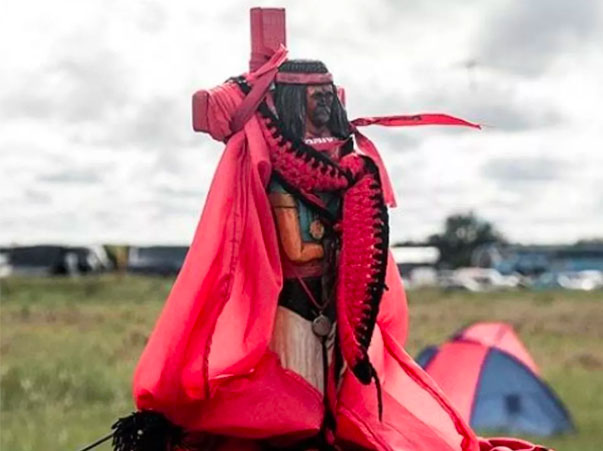 This woman was 22 years old and was married to Isidoro Heredia, a carpenter who later on was accused of killing his wife out of jealousy. The news had such an impact on the people from Salta that it sparked the popular devotion for this defenseless woman. 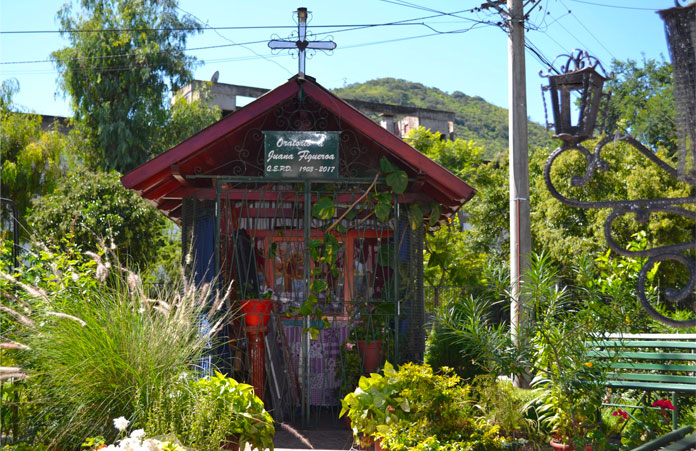 Unfortunately, it was the crimes against women that fostered the devotion for this kind of figures. Such is the case of La Telesita, who was burnt in Santiago del Estero during the second half of the XIX century; or La Ramonita from Córdoba, who was strangled to death out of jealousy. 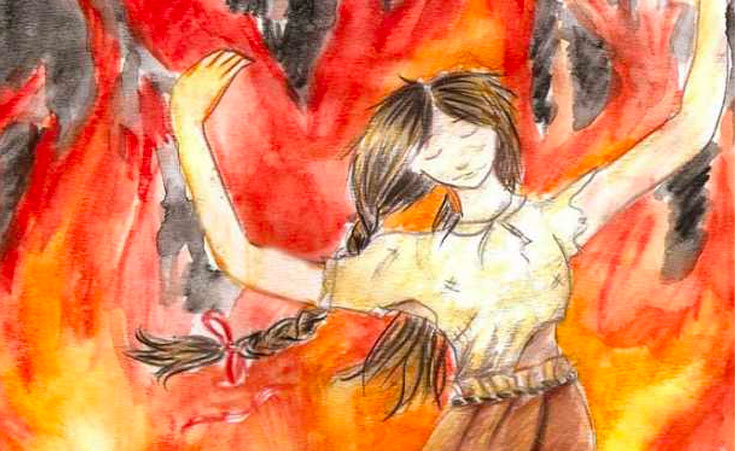 Many popular saints like Pancho Sierra, Madre María and Padre Mario are believed to have used their supernatural powers from the beyond. Madre María, who came from Spain to Buenos Aires with her family in 1869, was diagnosed with a tumor in her chest.

After being given up as a lost cause by the doctors, she met Pancho Sierra, who cured her and gave her a premonition: “ You won´t be able to engender any more children of your flesh, but you will have thousands of spiritual children…Search no more, this will be your life´s mission.” She dedicated herself to taking care of the others, preaching her doctrine and helping those in need. Her death was recorded as a sorrowful event for people at that time. Her body lies in the Cementerio del Oeste, which is still a meeting point for her followers. 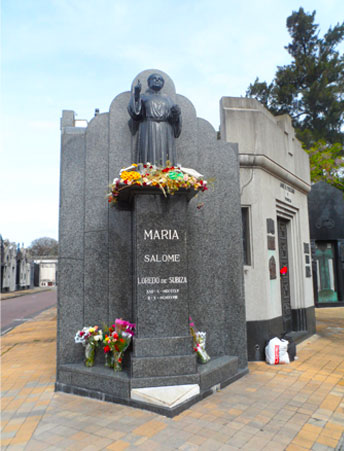 One peculiar and popular story is that of Antonio Mamerto Gil Núñez, better known as Gauchito Gil. He was born and raised in Mercedes, Corrientes, but became famous all over the country. Throughout the territory travelers may come across places of worship built on the roadside where his devotees make offerings of candles, wine and cigarettes.

Gauchito Gil was fond of parties and drinking; he was feared by his enemies and adored by women. He fought in the War of the Triple Alliance but a vision of the Guarani God led him away from the battlefield: “Do not shed your fellowman´s blood”. Such an act of rebellion resulted in persecutions and, though he miraculously managed to dodge some executions, he was eventually put to death by the authorities on the road.

Every January 8th red candles are lit in honor of this avenger who, in spite of the many crimes he committed, is defended by thousands of people who see him as a powerful source of solace. 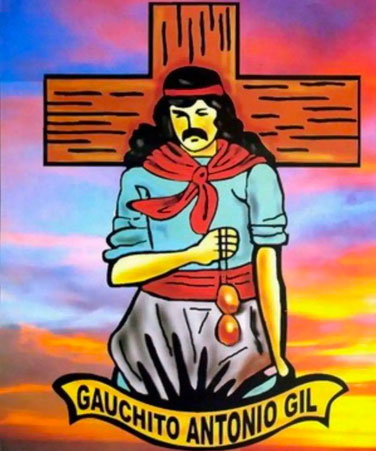 The protagonist of this fascinating story is Deolinda Correa, better known as Difunta Correa. She died of thirst in a desert area in San Juan, after traveling for many kilometers with her son in her arms in search of her husband, who had been recruited for the armed conflict between Unitarians and Federals.

Legend has it that her son was found alive and attached to his mother´s breast. That was catalogued by many as her first miracle. After her death, a shepherd who was walking past her grave promised her an altar if she helped him gather his flock of sheep and return home safely.

Her miracles gained fame in the region as well as in the rest of the country. Ever since, there are altars not only in the spot where she died, but also on the roads, where her devotees leave bottles of water, flowers and their requests. 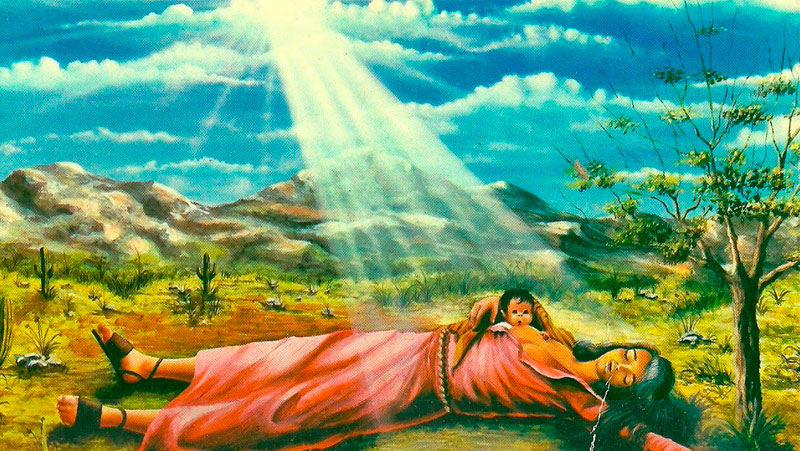 Enrique Gómez, Pancho Sierra, Andrés Bazán Frías, Juan Bautista Bairoletto, Miguel Ángel Gaitán. Evita Perón and Gilda are among the other most popular saints in the country. Such devotion is displayed in a variety of ways: in their tombs, with offerings of flower arrangements, clothing, crosses, plaques and many other things. The bond between these figures and their devotees also involves praying novenas, fasting and making sacrifices.

To better understand this cultural relationship, we interviewed Miguel Ángel Cabrera, a journalist and editor at the most relevant Religious Tourism webpage in the continent.

“In most cases tourist sites are associated to Christianity. The cities of Córdoba and Mar del Plata have created, within their corresponding tourism secretariats, interreligious tours. But there isn´t much more than that. In the city of Buenos Aires, oddly enough, the Entity of Tourism doesn´t offer something like that.”

“The variety can be observed in the architecture and the places where these sites are located. From the most extraordinary basilicas and cathedrals to the simplest constructions made from mud bricks. The diversity is also found in the kind of cult. For instance, the massive pilgrimage to Lujan, or Salta´s Week of Miracles, where the Church´s responsibility as an institution is concerned. As well as the massive events like the one in honor of Gauchito Gil in Corrientes or Difunta Correa in San Juan. It is people themselves who, through faith, create these places of worship”, explains Cabrera.

Cabrera highlights the Marian devotion in the country: “People´s faith revolves around the diverse Marian representations. We are a deeply Marian country. Luján, Itatí and Nuestra Señora del Valle in Catamarca are among the different shrines that summon thousands of parishioners to their celebrations”.

He also mentions the significance of the popular saints who are not registered in the Catholic Book of Saints: “The popular devotions are spread throughout the country. There are no roads without Gauchito Gil´s traditional red shrines and flags, or without Difunta Correa´s bottles of water.”

“Pope Francis is the one who attracts the most attention from the tourists who arrive in the city of Buenos Aires. Many of those who visit Argentina wish to see the places where the Pope exercised his pastoral work. There is a bus tour offered by the local Entity of Tourism to sightsee all those sites that were part of Francis´s life. There is a visit to the house where he grew up, studied and was even baptized. In the rest of the country, those who reach the sacred sites are mostly pilgrims rather than travelers. People who visit the place only for the sake of the celebration”, our special guest today concluded.