The Most Emblematic Barrios in Buenos Aires

The Most Emblematic Barrios in Buenos Aires

A tour of the most iconic barrios in Argentina´s capital city. Which one would you like to visit? 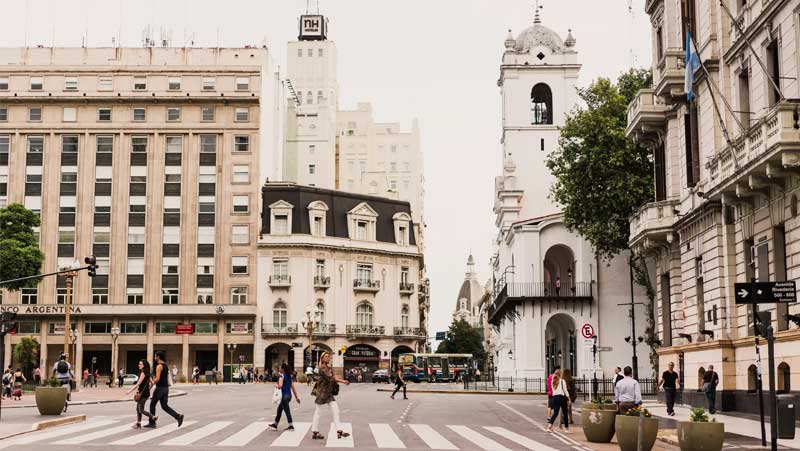 “Y ou can´t compose a tango without the streets and sunsets of Buenos Aires”, Jorge Luis Borges once claimed. And indeed, the Argentine capital city is laden with stories; its streets, barrios, cafes, blocks, sculptures and mural paintings are only a sample of those accounts, and a testimony to some of the secrets the city is willing to share with you.

Buenos Aires is divided into 48 barrios. Today we will be listing the most representative and emblematic in the city. Mind you, we will probably need more than one blog to describe each of them in more detail, as every barrio owns its unique charm. Come and find places for every taste, contrasts, cultural treasures, parks, museums, well-known restaurants and so much more.

In one word: Multicultural

This barrio is home to lovely green spaces and sites that reflect the multiculturalism of this capital city. The picturesque Barrio Chino, one of the landmarks in this area, is one case in point. Here you will find stores and restaurants of Asian origin, as well as national symbols.

Did you know that Belgrano owns a replica of New York´s Statue of Liberty? It was inaugurated long before the original in the United States, and built by the same architect, Frederic Bartholdi. It is 3 meters high – much shorter than the one in the Big Apple (93 meters high).

The Sarmiento Historical Museum, the Enrique Larreta Museum Theater, or the Rogelio Yrurtia Museum House are a testimony not only to the cultural but also to the architectural wealth of this area. The first one for its noticeable colonial design, which embellishes Juramento Street. Finally, for football lovers: on the border with another beautiful barrio called Núñez lies the River Plate Stadium, which was inaugurated in 1938. 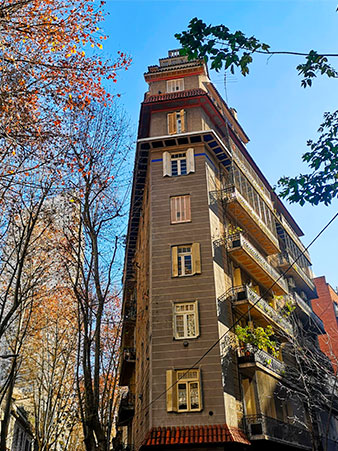 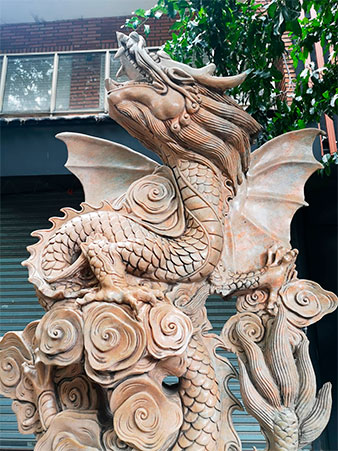 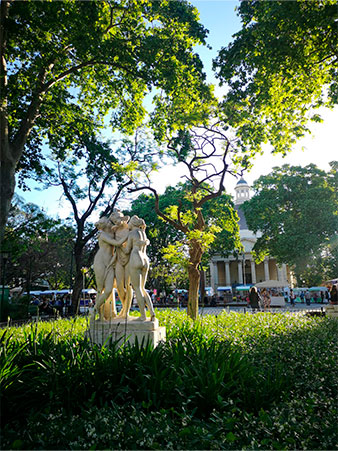 In one word: Passion

Surely, one of the most popular barrios in Buenos Aires. Both Caminito and the Boca Juniors Stadium brought it fame and worldwide recognition. It was named after the mouth of the Riachuelo nearby. This is a location that, long ago, welcomed a large number of immigrants, bohemians, sculptors, musicians and so many others.

The artist Benito Quinquela Martín was devoted to filling with colors this barrio, which, throughout history and due to economic and social circumstances, was the focus of tough crises. This painter devoted his life to portraying the more joyful and colorful side of La Boca, and Caminito – a street museum and alley – reflects that in a unique way. “I only paint in my country, and within my country, in my own neighborhood (barrio), La Boca and its port”, he once stated.

Besides these two great icons, this location stands out for its architectural jewels, such as the Argerich Hospital with its rationalist style. You may also enjoy a visit to another splendid building, the Usina Del Arte Center, which used to be a derelict edifice and it is nowadays one of the most remarkable cultural spaces in the city. 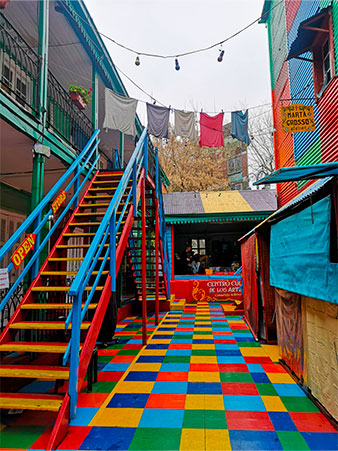 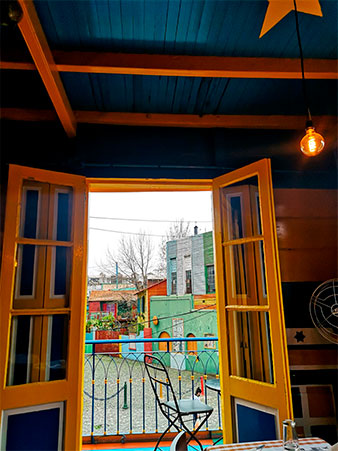 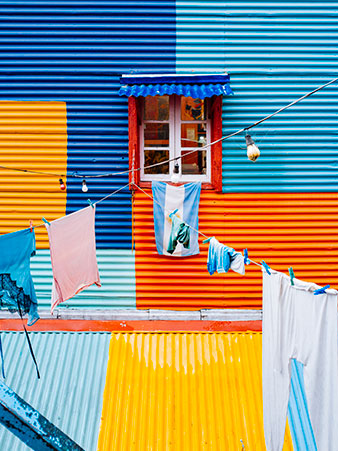 In one word: Bohemian

You will be face to face with a completely different perspective of the city when you arrive in San Telmo. This barrio with many contrasts and a majestic architecture stands out for having remained over time without losing its exceptional essence. Indeed, you may get the feeling you have traveled back in time when you wander around its picturesque narrow streets or stop by the glorious cafes and iconic restaurants in this area.

The Casal de Catalunya, with its art nouveau style, the Engineering School of the University of Buenos Aires, with its clearly neoclassic style, or the Agar Cross with its British influence: further confirmation of the great variety and diversity within this capital city.

The street circuit is originally enhanced by the figure of Mafalda, an iconic cartoon female character created by Quino, a famous Argentine caricature artist. “She” has a space reserved for you, right beside her, so you may immortalize your visit with a typical postcard.
A few blocks away from here you will find Casa Mínima – the narrowest house in the city. This barrio is also home to the Modern Art Museum, or shopping malls like the Viejo Hotel´s or the Solar de French. However, the Market of San Telmo is undeniably the most famed and picturesque highlight in this location.

It may interest you: Diego Maradona´s tour in Buenos Aires 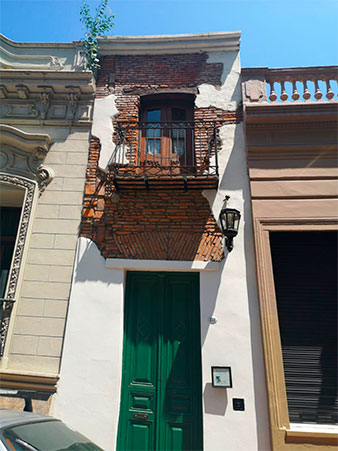 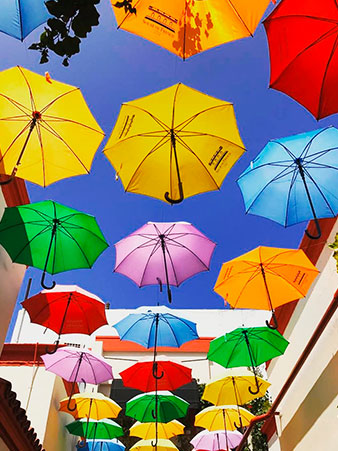 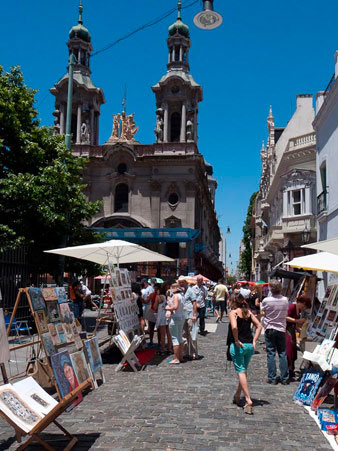 In one word: Awe-inspiring

Even when it is one of the newest barrios in Buenos Aires, Puerto Madero is still one of the most frequently visited, admired and photographed by travelers. Its gigantic buildings, the Woman´s Bridge and the harbor are among the landmarks most appreciated by both tourists and locals, who – while they are at it – take the opportunity to indulge in a meal or a coffee in the exclusive restaurants and cafes found in this beautiful setting.

Puerto Madero is also home to the museum-ship ARA “Fragata Presidente Sarmiento”, the Humor Museum, the Immigration Museum, the Tango monument, and the UCA´s Fine Arts´ Pavilion: cultural icons that further speak of the versatility of this barrio, its wealth and the splendor of its surroundings. And though the harbor area receives the most praise, Puerto Madero also features a Wildlife Reserve- the most extensive and outstanding green space in this city. 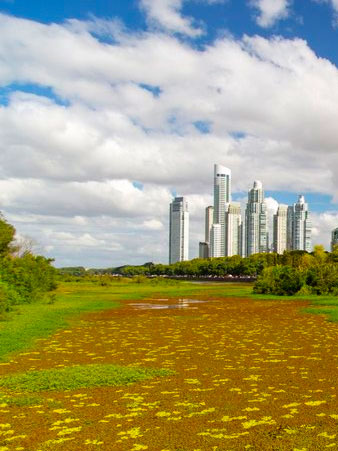 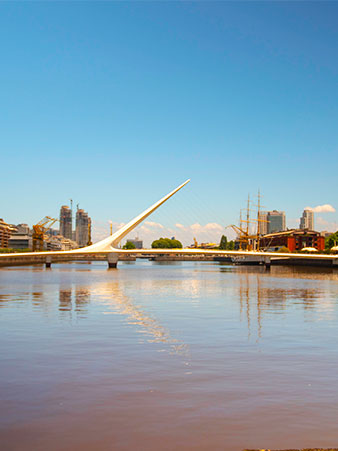 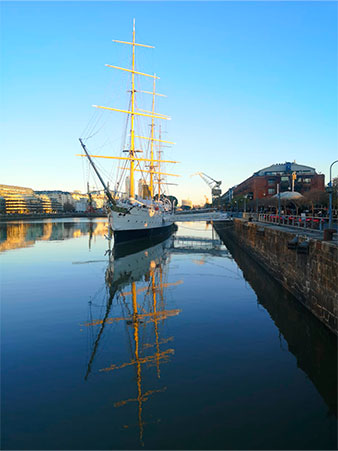 In one word: Distinguished

Two important features for which these barrios stand out among others are their architecture and their historical value. We have chosen the word “distinguished” to describe Recoleta for a good reason. And you only need to appreciate its many attractions to verify that: the Ateneo Grand Splendid bookstore – considered as one of the most beautiful in the world by many prestigious journalists- , the stunning architecture of the School of Law, and the impressive metallic Floralis Genérica sculpture are only a few examples of the many must-see icons in this part of the city.

The Recoleta Cemetery is a destination per se. A cemetery? Yes, that´s right!
Its mausoleums and stories have turned this place into a captivating landmark for all travelers. On leaving it, the contrast between life and death may be easily seen in every corner: the many bars, restaurants and iconic cafes are clear proof of that.

We cannot fail to mention the renowned Fine Arts National Museum, the National Library or the Cultural Center of Recoleta, all of which are likely to make you view Recoleta as one of your favorite barrios in the city of Buenos Aires. 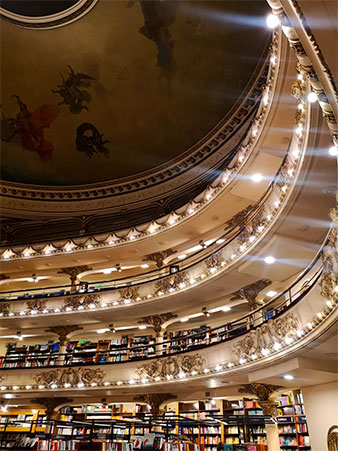 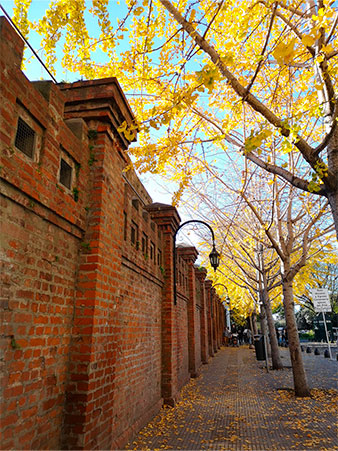 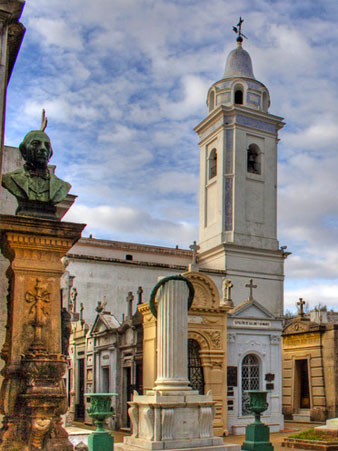 This is one barrio laden with contrasts, colors, entertainment and joy. And while Palermo Hollywood- with its mural paintings, bars and eateries- is one of the liveliest areas in the city, in some other part of this barrio vast green spaces host some of the most stunning and frequently visited spots: the Japanese Garden, Palermo´s Woods, Palermo´s Hippodrome, the Botanical Garden or the Rosedal of Palermo, just to name a few.

Bear in mind that you are bound to need more than one day to tour this barrio more thoroughly. Palermo boasts a long list of iconic attractions that await your visit. The splendor and beauty of its streets, monuments and museums will provide the perfect finale to this fascinating tour. 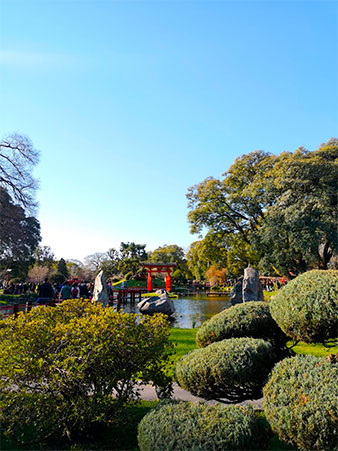 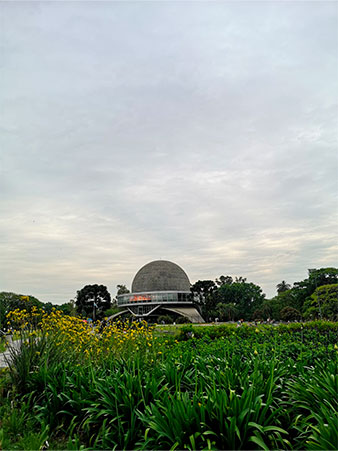 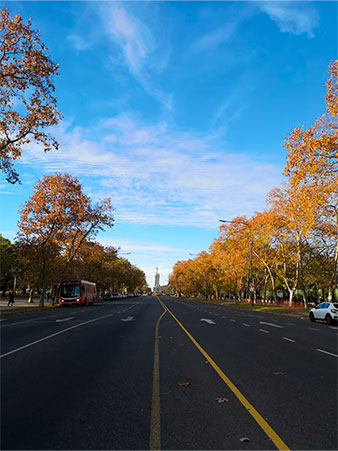 – Coghlan: This barrio was erected in the area where the Irishman Juan Coghlan founded a railway station. This is a place loaded with history and with a significant British influence in its architecture and the sports clubs in this part of the city. A charming and quiet neighborhood that is home to impressive facades and pathways framed with colossal trees. You will surely feel as if abroad while visiting the station and its surroundings.

– Parque Chas: More popularly known as the maze. This is part of an urban project that stands in stark contrast with the rest of the city. Most of its streets bear the name of a major capital of the world. You will need to appeal to your good memory if you don´t want to get lost here.

– Belgrano R: A “non-official” barrio with a unique charm. A landmark for locals. The mansions and restaurants fill this location with magic. Plaza Castelli is one of the spots you must visit to know what the beauty of Belgrano R. is all about.

“When the roughness and the rage of Buenos Aires make me feel most lonely, I go for a walk around those barrios” Ernesto Sábato (famous Argentine writer)