When and where do we get to see whales in Argentina?

When and where do we get to see whales in Argentina?

Books and historians have portrayed the deeds of men on their migration to new places: conquests, empires, trails, wars or battles for territories, just to name a few. Roads and sea travels became the landmark of these events, which indeed changed the way the world was perceived and understood at the time. 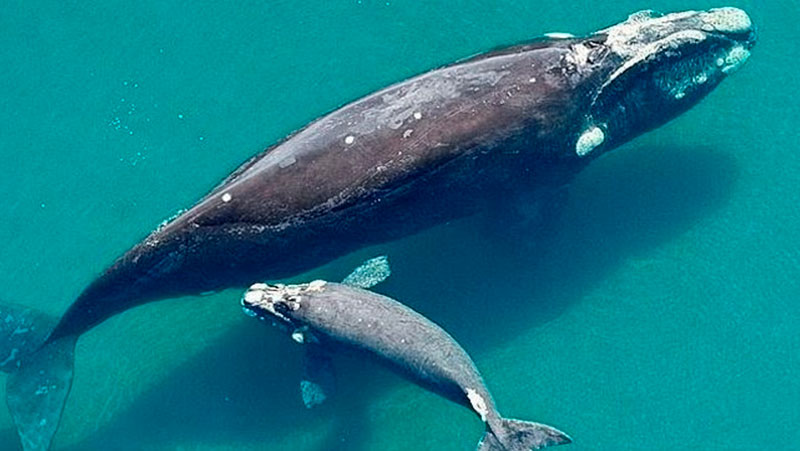 ven when traveling nowadays may be as easy as ABC, we are still tiny and insignificant creatures lost amid the vastness and the mysteries we have not managed to unravel yet. For those people who dwell in coastal areas the sea is their source of inspiration, food and even entertainment. It does not come as a surprise, thus, that thousands of travelers should dream of getting away to some desolate place with crystal-clear waters.

But the sea is host to much more than the desire of those who have been lucky enough to stand in awe…A myriad of species travel its waters in the face of the human powerlessness to “conquest” the depths of the sea. Vessels, submarines, boats, rafts….They will never match up to the undersea life.

For those who long to know new places and enjoy the breathtaking wonders of nature, we would like to make a few recommendations on whale watching in Argentina. There is one spot in this stunning territory that offers travelers the chance to come in “magic” contact with the largest animal on Earth. Such place is called Peninsula Valdes, home to hundreds of whales between June and December.

A gift from nature that has become the dream of thousands of travelers around the world. A once in a lifetime experience that reminds us of the vastness of creation and the beauty of all of its creatures. 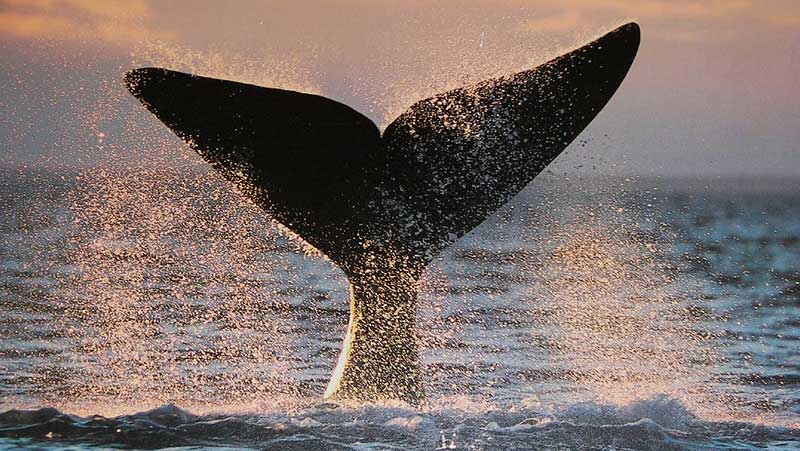 Getting to know the whales

These mammals are divided into 2 families: “Toothed” whales (sperm whales and orcas) and “Baleen” whales (humpback whales and blue whales). They may measure between 25 and 32 meters in length, and may weigh up to 180 tons. Their tail fins or flukes are horizontal, which helps these creatures propel themselves up to the surface in order to breathe, though they may stay underwater for up to one hour! Most of them feed on krill (40 million in one day) o small crustacean, except for the orcas who also feed on other large mammals like penguins, sea wolves, etc. Throughout their lives they migrate from cold-water seas, where they feed themselves, to warmer seas to mate and to bear their calves (12 months later). 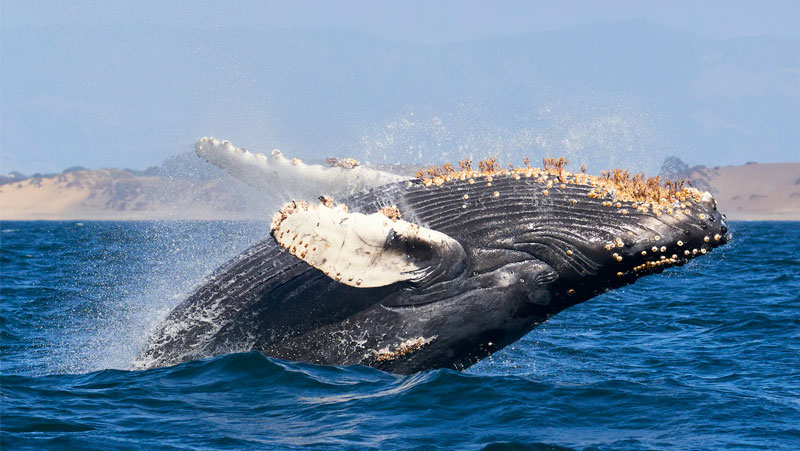 From Peninsula Valdes visitors may sight the Southern Right whale. Such an event may be carried out either from the coast or while embarked on a whale watching tour. Depending on the season, the whales can be sighted from the very city of Puerto Madryn, or rather a few meters away from them, right from the shores of El Doradillo beaches (15 km from the city). For the options on board of a vessel, the fares will vary according to the kind of vessel chosen (a zodiac boat or a rubber dinghy), the number of passengers on board, the duration of the trip and the departure time (ideally at sunset for those who seek to make better quality pictures).

According to a report provided by the Whale Conservation Institute, the mothers carry their calves to the place where they were born, thus sharing some details of their first months of life with their offspring. This, among other facts, have been made known thanks to the work of such entity based on the records of the investigations carried out ever since 1971. Since their foundation they have been able to “photo-identify” almost 4,000 whales.

Therefore, all those adventure-seekers who take the chance to live this experience will know the history of this family beforehand. These mammals swim at a slow pace, they are not dangerous but rather curious instead, which makes the entire watching even more awe-inspiring. Out there, in the middle of the ocean, travelers will be able to enjoy an extraordinary spectacle. Puerto Madryn is considered the national capital of diving and underwater activities. However, the whales are indeed its major attraction.

Further information about the sea wildlife calendar in Peninsula Valdes

The Southern Right whales are not the only visitors in this part of our country. In March and April, you may also sight orcas in Punta Norte and Caleta Valdes, both located on Peninsula Valdes. According to some experts, the birth of sea lions and elephant seals attract the orcas, which approach the area in order to hunt.

It may interest you: How do I get to see pumas while traveling in Argentina? 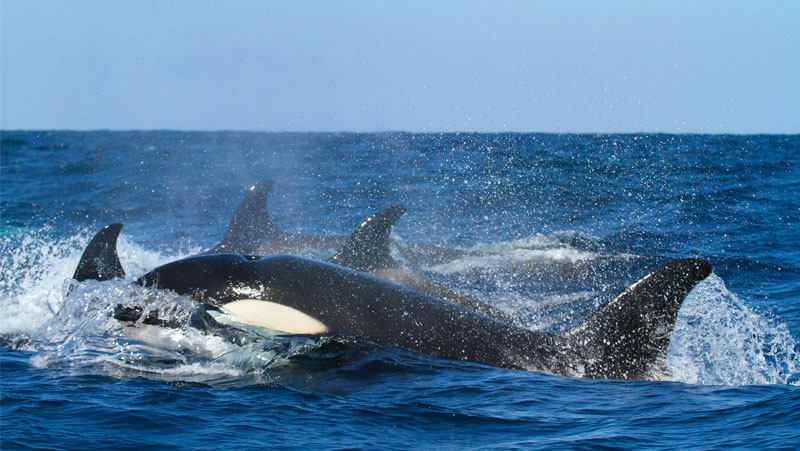 Between late September and mid-March, visitors may also sight other animals such as the Magellanic penguin. The friendliness of these seabirds entices and makes it possible for visitors to come into close contact with this species. During this season, penguins build their nests, mate, incubate the eggs and feed their chicks. Isn´t that the best moment? Indeed, it is a unique one. 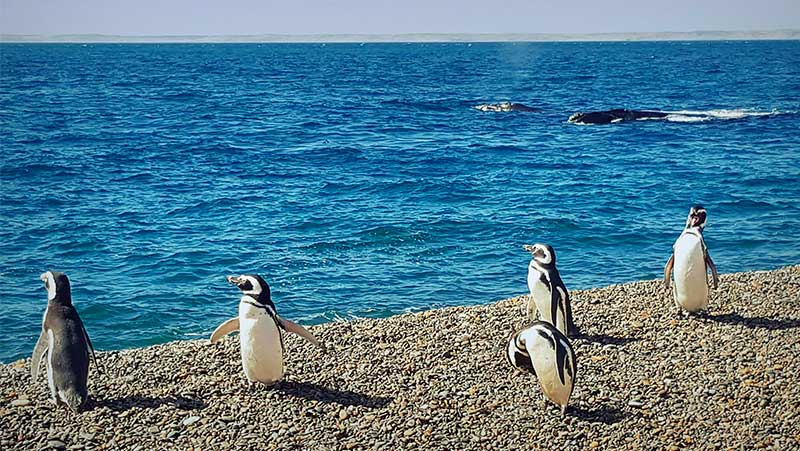 Sea lions can be sighted all year round on the peninsula. “Lobería Punta Pirámide” is one of the most important meeting points for these animals, which are able to adapt to diverse ecosystems. In this fascinating place, the life of these mammals magically transpires between the sea and the land. They feed on fish, squid and crustacean; they may stay underwater in depths greater than 120 meters, and they may weigh between 150 and 350 kilos.

As for elephant seals, they are much bigger and may weigh up to 4 tons (their pups are born weighing up to 40 kilos). They spend most of their time at sea, only approaching the coast in order to breed or molt. These magnificent animals will truly amaze you! 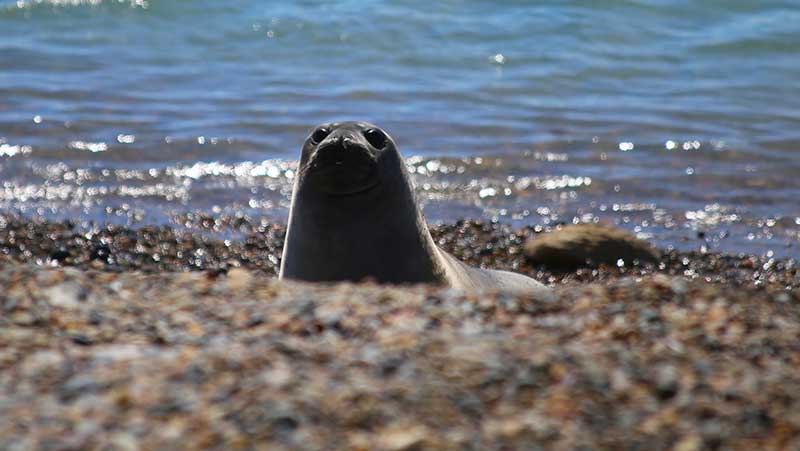 The Patagonian dolphin or “sea panda”, a.k.a. known as “tonina overa” or Commerson´s dolphin, may be sighted throughout the year. The looks of this cetacean get all the attention, as its white-and-black color stands out in the vastness of the ocean. The best spot to watch these creatures is Rawson, thanks to the mouth of the River Chubut. The excursions depart from Bahía Engaño: the vessels carry 60 passengers a few kilometers away from the coastline to sight the dolphins. 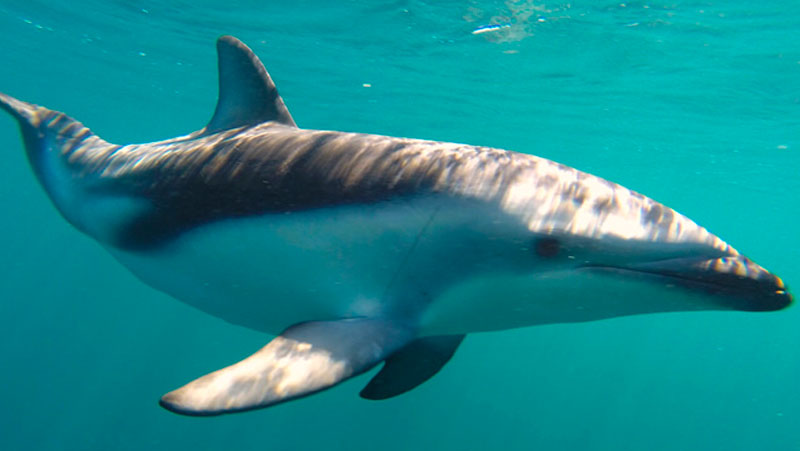 Not necessarily will you need to carry them back home. Odd as this concept may sound, this wonderful initiative seeks to make a contribution to the Southern Right whale research, thus playing a part in their preservation. The Whale Conservation Institute is a non-profit civil organization that works for the preservation of whales and the ocean through their research and through education.

One of the proposals is the adoption of whales, of the very whales they have been able to identify through their thorough studies for more than four decades. It requires the payment of a monthly fee, for which you will receive a special book, the photo gallery of the whale of your choice, among many other things. Each whale has a name, and you will have access to their individual history recorded by this NGO.